END_OF_DOCUMENT_TOKEN_TO_BE_REPLACED

Gautam Dantas discusses his serendipitous discovery of soil microorganisms that metabolize antimicrobial compounds and his subsequent work on the resistome. 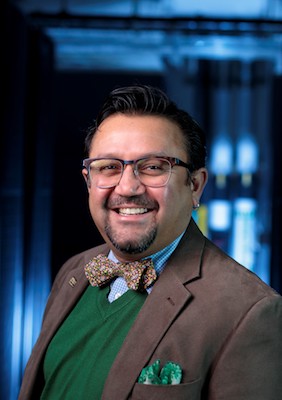 While searching for lignin-degrading soil microbes, Gautam Dantas discovered growth in an antimicrobial compound-containing control! He has since studied the resistance determinants (resistome) of soil and clinical samples to determine their similarities.

Sequencing information is extremely useful for descriptive studies, but there’s an increasing trend in microbiome studies to use the sequencing data as a basis for forming hypotheses. These hypotheses can then be tested by some variation of classical techniques, be in biochemical, culturing, animal models, etc. Surveying who is there helps scientists make testable predictions.

Gautam’s resistome research is built on the research of many, but especially inspired by:
Gerry Wright, who proposed the presence of a resistome. The resistome is a collection of genetic determinants in a microbial group that allows phenotypic resistance against antimicrobial compounds.
Julian Davies, who proposed the producer hypothesis. The producer hypothesis suggests that the same microorganisms that produce antimicrobials must also be the source of resistance, because they need to be able to protect themselves against the action of their own compounds.

Gautam’s discovery of antibiotic-eating microbes was completely serendipitous! As a postdoc, he was looking for lignin-degrading soil microbes and set up a culture with antibiotics as a negative control. To his surprise, there were some soil microbes that were able to grow - using the drugs as food! Samples from 3 different states were all able to support microbial life.

The resistome of soil is very similar to the resistome of clinical samples, but the study design doesn’t allow Gautam to conclude directionality: do the genes move from the clinic to the environment or from the environment to the clinic? This requires studying the resistomes over time, rather than the snapshot analyses this study generated. However, Gautam’s group has received funding to do longitudinal studies, which will help scientists understand how resistance originates and then moves to new microbial communities.

Context is very important for determining disease. A microbe may make one person but not another sick. Context can also be the genes carried by the microbe, and E. coli is a great example of this. Some E. coli are very good at causing UTIs but cause no disease when carried in the gut.

“Virtually anything to do with microbes has value when viewed with an ecological lens.”

“Microbial ecology and ecosystems are an ideal lens to consider both basic microbiology and translational microbiology.”

“I think the microbial ecology field is maturing really nicely to the point where we can do the observational work, which is really exciting, using sequencing-based ‘omics methods, but then transition over to the validation of those ‘omics models.”

“We think, from a clinical perspective, that antibiotics are these privileged compounds, but they’re not really. They’re organic compounds, and there are bugs out there that can detoxify these compounds - and then eat them!”

“For me, the reason I come into work every day - I’d like to tell you it’s to save lives, but honestly it’s to interact with the people in my lab. That’s my greatest privilege.

Elie Metchnikoff is well known in early biomedical science. If you know his name, it’s likely due to his role in immunology; he’s the discoverer of the macrophage, among other important immune cells. Working in the late 1800s and early 1900s, he was a contemporary of Paul Ehrlich, and the two won the 1908 Nobel Prize for their work on immunity in infectious diseases.

As he grew older, Metchnikoff became more interested in senility and aging - he would probably be a fan of life-extension studies that are popular today. In looking to long-lived populations, he turned to regions of the Balkan States and parts of Russia which had unusually high numbers of people living past 100. He noted that the centenarians were people who lived relatively simple lives, enjoying moderation in food and drink and getting some exercise everyday - similar to modern findings of long-lived people, Metchnikoff thought everyday exercise and living in clean air was good for a long life.

Metchnikoff brought in some of his scientific findings to his ideas about aging. For example, he proposed that senility was tied to a cell he postulated might exist, which he called a neurophage - and in recent years, scientists have uncovered a role for sleep to remove metabolic byproducts from the brain, though I’m not sure phagocytes have been pinpointed as the removers. However, Metchnikoff also attributed whitening of hair, muscle atrophy, and bone density loss to other phagocytic cell types - not entirely the case.

Metchnikoff attributed some of the toxins that contributed to aging and senility to be products produced by the microbes present in the gut, which he saw merely as waste products. The toxins from gut bacteria could interfere with phagocyte function, he postulated, which is where the tie to probiotics comes in. Metchnikoff further believed the Lactobacillus bacteria found in yogurt - commonly eaten in the cultures he observed to produce long lives - suppressed the toxogenic effects of the gut bacteria and their waste products.

The idea that probiotics can extend life didn’t take off among doctors, but the role of probiotics is being actively studied by many microbiome scientists today.

Gautam Dantas discusses his serendipitous discovery of soil microorganisms that metabolize antimicrobial compounds and his subsequent work on the resistome.