Meet the Microbiologist Bacteriophage Interactions in the Gut with Jeremy Barr

END_OF_DOCUMENT_TOKEN_TO_BE_REPLACED

Jeremy Barr discusses his work on bacteriophage interactions with both bacteria and mammalian cells.

Bacteriophage are viruses that infect specific bacteria. Jeremy Barr discusses his discovery that phage interact with (but don’t infect) mammalian epithelial cells. He explains how these different organisms: bacteria, bacteriophage, and the mammalian host, may exist in three-way symbioses.

Jeremy’s work as a postdoc focused on developing a protocol to clean phages for use in tissue culture. He and his advisor, Forest Rohwer, were asked to use this protocol to clean phages for a patient extremely sick with a multidrug-resistant Acinetobacter baumannii isolate. Within 24 hours, they used an experimental lab method to clean and purify phages that were used in an experimental procedure to treat a very sick person; phage therapy ultimately saved his life.

Building a gut-on-a-chip allowed Jeremy to study the interactions of phage with the gut in a controlled environment. The preliminary results suggest that the phage adapt to better adhere to the mucosal surfaces over time. Discovering the protein domains that phage use to stick to mucins opens up the possibility of using these domains in personalized therapeutics, by designing these into new phage or other therapeutics.

“Phage and phage therapy has been studied and used for 100 years. It’s a very old technology that’s really come back into focus now.”

“Phage do not infect and kill mammalian cells in the same way they do bacterial cells. That’s the dogma and that’s true. However, that doesn’t mean that they don’t interact with our cells, and I think this has been a big, overlooked part of the biology.”

“I think it’s naive for us to think that our own cells don’t sense or interact with these huge parts of the microbial community [phages].”

“Using the gut-on-a-chip system, we can control a lot of the variables. We’ve taken this device that recapitulates fluid flow and mucus turnover, and to that we’ve been able to inoculate very specific phage and very specific host. We’ve allowed these to coevolve with each other in that mucus layer.”

“We absolutely need more people! There’s so much diversity in phage biology and so many questions to answer, so the more people in the field the better. I think we can advance a lot of science.” 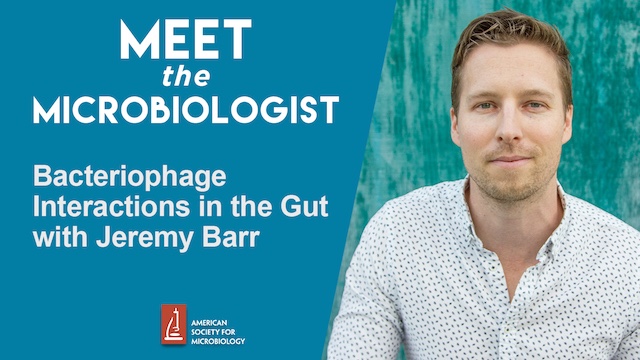 
Jeremy’s model for studying mammalian cell interactions with his gut-on-a-chip system was really fascinating. The ability to add variables like mucus and shear forces to a system makes scientists’ in vitro systems that much closer to mimicking the true environment of the gut, which of course is the goal. As Jeremy was talking about his system, I was thinking about how it was that scientists first began to study living cells outside of the environment of the human or animal body. My hope is that most of you are familiar with the story of Henrietta Lacks, whose cancer cells gave rise to the first immortal cell line that would propagate without end under culture conditions, but scientists had been using these in vitro systems for decades prior to this. What is the history of cell culture? I’ll explore this in today’s history of microbiology tidbit.

One of the scientists who established cell culture techniques is Ross Harrison, who performed his experiments in part at Johns Hopkins School of Medicine. He published on a method that became known as the hanging drop culture in 1907. Harrison adapted this hanging drop method, which was being performed by microbiologists to grow bacteria in a confined and controlled environment, for the use of animal cell growth. Funny enough, I couldn’t find any information readily available online regarding which scientists developed hanging drop method or who invented this technology, even though the technique is still in use in some parts today.

Adapting this method for tissue culture required placing tissue fragments - and Harrison’s work was done using frog embryos, so in this case tissue fragments of frog embryos - into a drop of fresh lymph on a sterile cover-slip. The lymph would coagulate enough to allow Harrison to invert the slide and grow the cells inside the small drop - which worked well to allow the tissue to continue to grow in the small volume held in place partially due to surface tension. This allowed for experiments regarding what types of tissue could be grown and what different media in could the tissue be suspended in... but this is a pretty small volume and you can probably already imagine that to use cell culture for developments like growing vaccine-strain viruses, larger volumes of cells are needed.

At the beginning of cell culture, scientists required primary cells, which are cells taken directly from an animal. Some advancements on the hanging drop technique were made by Alexis Carrel and Charles Lindburgh. In 1910, Carrel adapted this hanging drop method to grow chicken, rat, dog, and human tumors, and by 1912, he had won the Nobel Prize for Medicine for his work developing vascular suture and blood vessel transplantation techniques. Lindbergh is in fact the same Lindburgh who was famous for his trans-Atlantic flight and his son’s kidnapping - you may not realize that Lindburgh contributed to medical technology after these brushes with fame.

Lindburgh had an interest in medical advancements as a result of his sister-in-law’s heart disease. Lindburgh met Carrel, who was working on vascular biology, and went to work in Carrel’s lab at the Rockefeller Institute. Together, they developed a continuous medium-circulation flask that provided fresh medium to cells grown in culture while flushing away cell waste products. This allowed Lindbergh to maintain a continuous cell culture in a tissue culture flask - which were made entirely of glass, not plastic - for 105 days, or more than 3 months. This type of tissue culture growth apparatus was subsequently adapted by other investigators throughout the 1940s and 50s to become the techniques we know today, which are being adapted still into new organs-on-chips as Jeremy described.

Though these advancements clearly laid the groundwork for future cell culture techniques, for many decades, cell culture required relatively fresh cells to seed new cultures. The now well-known case of Henrietta Lacks, whose cells were taken without her or her family’s authorization and whose story is wonderfully told by Rebecca Skloot in her book The Immortal Life of Henrietta Lacks, describes the darker side of early cell culture, highlighting the lack of consent and barriers to access that continue to exist in various formats even today. Just as the story surrounding collection of immortalized human cells has a dark side, so too do the early days of cell culture development.

In addition to his fame for his flight, Lindburgh is also well remembered in history as a Nazi sympathizer preceding and during the second world war. Carrel shared many of Lindburgh’s prejudices, though Carrel himself died in 1944, before the final demise of the Nazi party at the end of World War II. In 1935, Carrel published a book supporting extreme measures of eugenics, including support for euthanasia. During the war, Carrel worked for the Vichy government as the head of the French Foundation for the Study of Human Problems, recommending minimal food rations for children, laborers and mentally ill prisoners of war.

After the war, Carrel was highlighted as a French scientific hero due to his contributions to science and his role during the war went largely unreported. In the 1990s, new reporting on his role led to streets and scientific institutions named in his honor to change their names. This underscores the value of scientists’ contributions to humanity as well as any scientific contributions, while in the past these scientific breakthroughs often overshadowed the horrible ways these scientists wielded their power and influence.

Jeremy Barr discusses his work on bacteriophage interactions with both bacteria and mammalian cells.