Meet the Microbiologist Bioremediation of Oil Spills with Joel Kostka

END_OF_DOCUMENT_TOKEN_TO_BE_REPLACED

Joel Kostka discusses microbes and oil spills, including his studies of oil’s effect on microbial communities and where microbes can best degrade oil.

What kinds of microorganisms can degrade oil? How do scientists prioritize ecosystems for bioremediation after an oil spill? Joel Kostka discusses his research and the lessons from the Deepwater Horizon oil spill that will help scientists be better prepared for oil spills of the future.

The Deepwater Horizon oil spill was the largest accidental oil spill in the marine environment (a larger had occurred on land). Microbiology-related questions regarding the spill fit into 2 major categories:

Petroleum hydrocarbons are a natural product, and microorganisms' ability to degrade these hydrocarbons likely evolved as the hydrocarbons were formed from their original organic matter.

After the Deepwater Horizon oil spill, Joel's research team wanted to investigate how the spill affected the carbon cycling normally carried out by microbial communities. Because the disaster was unpredictable, there were few baseline studies to understand the pre-spill conditions. Studying other pristine environments helped his group to better determine how the oil had changed the spill environment; large scale mesocosms (recreating the same conditions in large lab terrariums) to study the fate of oil in microbial communities.

The studies that followed the Deepwater Horizon oil spill have helped scientists learn which sites would need to be prioritized for remediation, should another spill occur. Scientists have also identified microbial biomarkers that can be used to assess which environments need to be bioremediated, and how that bioremediation should occur.

"You can get the release of hydrocarbons anywhere along the stream of extracting the hydrocarbons, from the environment where it's extracted to where you deliver to people that use it. Some of the most dramatic problems or disasters that result from the release of oil and gas into the environment is at the initial stage, where oil and gas is pumped out of the ground, such as in the Deepwater Horizon oil spill in the Gulf of Mexico."

"Oil is a very complex mixture made up of tens of thousands of different compounds. As it's degraded, it actually becomes more complex—there are twice as many compounds as there were in the original oil mixture!"

"I studied oil-contaminated beaches and we found it was a relatively good story, as far as oil spills go. Oil was rapidly biodegraded in the beach...oil came ashore in June 2010, and we saw one year later, that all of the oil had been degraded by microorganisms. The oil chemistry levels were back to baseline, and the microbial communities in those shore line segments had returned close to baseline levels. In this case, we were lucky enough to have samples from before the spill."

"My studies are at the interface of chemistry and microbiology. All of the best microbiologists I know are also great chemists." 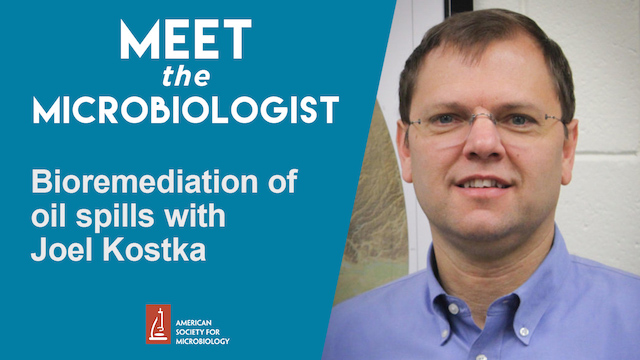 
Joel's research involves very large study subjects: the ocean floor, beaches, seawater. Studying the interactions between environmental conditions and microbial behavior in these natural conditions is important, but can make controlled experiments difficult, which is where those large-scale mesocosms come into play. By using some of the same substrates, seawater, and microbial inoculants in the mesocosms in the lab, Joel and other scientists can recreate multiple mini-beaches or other natural habitats, which can then be treated differently for a more controlled study.

These mesocosms brought to mind another scientist who believed it important to study microbes in their natural habitat, and who built mini-ecosystems that mimic the natural environment: Sergei Winogradsky. I actually can't believe I haven't spoken about Winogradsky in a previous History of Microbiology tidbit, but fortunately I don't think I have, so he and his work will be our focus today.

Sergei Winogradsky was born in 1856 in Kiev. He began his scientific career in a botany lab, studying a scourge of beets, working right around the time that Robert Koch was developing his postulates (which stipulate that one bacterium causes one disease, through a variety of proofs). After plant pathology, Winogradsky turned his focus to the filamentous bacterium, Beggiatoa. His studies on Beggiatoa metabolism of hydrogen sulfide helped form the foundation of what scientists now call the biogeochemical cycles: the movement of elements through different phases, due to biotic and abiotic factors, around the glob.

He moved from sulfur to nitrogen metabolism, and eventually discovered the two-step nitrification process. Winogradsky recognized that microbial behaviors were dependent on their neighbors, and developed a way to observe communities of microbial species in the lab. Here I'll quote from a recent ASM article about Winogradsky and his discovery:

By mimicking natural soil conditions, Winogradsky observed how the oxygen-requiring (aerobic) nitrification bacteria were able to deplete oxygen levels down to a point where the anaerobic (requiring the absence of oxygen) nitrogen-fixer, Clostridium pasteurianum could grow and fix nitrogen. Such a discovery underscores the interconnectedness of microorganisms, who occupy the niches created by their neighbors' activities and use the products of one metabolic pathway as substrates for another.

The mimic of natural soil conditions is what we now call a Winogradsky column, which allows bacteria that fill different niches, such as aerobic versus anaerobic microbes, to be enriched. The best part about Winogradsky columns is that they generate a beautiful visualization of the microbial world, as populations of various colors will bloom over the period of several weeks. Assembling a winogradsky column is fairly simple and a fun at-home activity; just make sure you use a transparent container. The basic instructions are to gather some mud, water, egg (to provide sulfur), paper (to provide carbon), and mix. See The Joyful Microbe that provides a nice step-by-step instructional; you can see a number of homemade Winogradsky columns progressing over time if you search twitter for "Winogradsky column."

Finally, even if you don't want to make one for yourself, I strongly encourage you to take a look at the Small Things Considered blog "How to Build a Giant Winogradsky Column," by former senior ASM contributor Scott Chimilesky. Scott built a giant column at the Harvard Museum of Natural History and details the process, from mixing over 10 gallons of mud and water for inoculation to how to expose the photosynthetic microbes to light. Scott is also a very talented photographer, and his article has a number of gorgeous images, which I encourage you to take a look at. They may inspire you to make your own column!

Joel Kostka discusses microbes and oil spills, including his studies of oil’s effect on microbial communities and where microbes can best degrade oil.