END_OF_DOCUMENT_TOKEN_TO_BE_REPLACED

Graciela Lorca talks about her work on citrus greening disease and the role of the microbiome in diabetes development.

Graciela Lorca studies genetic systems to find positive and negative microbial interactions that lead to disease. She talks about her discovery of chemical inhibitors for the citrus greening disease bacterium, Liberibacter asiaticus, and how a specific strain of Lactobacillus johnsonii modulates the immune system and may help prevent development of diabetes in people.

Citrus greening disease, or huanglongbing, is a disease of citrus trees causing a major epidemic among citrus farmers around the world. The disease causes trees to sicken and eventually die, and is best diagnosed by PCR amplification of the bacterial DNA from the bacterium that causes the disease, Liberibacter asiaticus. Because the disease spreads through the tree at different rates, it’s important that many samples be tested for accurate diagnosis.

Quarantining the disease has proved difficult, as undiagnosed roots can transmit the disease if they are used to hybridize with canopy plants. The disease becomes even harder to contain under bad weather conditions: the high winds of recent hurricanes can scatter the insect vector, the Asian citrus psyllid, leading to infection of new orchards.

Although L. asiaticus can’t be cultured, Graciela performed a screen on L. asiaticus transcription factors that were produced by E. coli. These were tested for inhibition by a chemical library, and discovered that a common treatment for gout, benzbromarone, inhibited protein activity. This discovery was confirmed using in vivo infected plants and by expressing the gene in related bacterial species, Graciela and her team predict the protein plays a role in responding to osmotic stress. The protein target of the chemical differs widely between citrus greening disease and gout, but the protein-chemical interaction is similar enough to allow protein inhibition.

Is there a link between the microbiome and diabetes? 10 years ago, Graciela and colleagues discovered that Lactobacillus johnsonii can rescue animals that are predisposed to diabetes. L. johnsonii inactivates a host enzyme, IDO, which regulates proinflammatory responses. Activated immune cells can travel to the pancreas and attack beta cells, leading to diabetes. Regulating the proinflammatory response by administering L. johnsonii as probiotics offers the opportunity to control development of diabetes in predisposed people.

“Right now, we don’t have a way to grow Liberibacter asiaticus in the lab, and that has been the biggest problem in finding a cure for the disease.”

“I don’t work alone...I’m able to do all these interesting translational studies because I have good collaborators.”

“We had just started sequencing things. We knew there were a lot of bacteria that we couldn’t grow in the lab, but we didn’t know the extent of it—how rich it was and how much more we had than was predicted! When that started coming up, it was fascinating.” 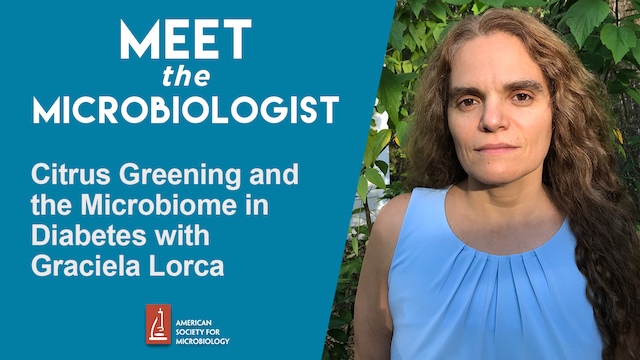 
Many of you are probably aware that one of the most important plant microbial communities surrounds its root structures. Does this count as part of the plant microbiome? From looking at a few references, it seems it does, though these root-associated microorganisms aren’t only in direct contact with the plant root, but surround the soil in the vicinity of the root structures. This microbial community, called the rhizosphere, is today’s focus for our history of microbiology tidbit.

By the early 1900s, scientists recognized that organisms could live in symbiosis with plants; in particular, the microrrhyzal relationships between fungi and plants had been recognized as a symbiotic relationship by German botanist Albert Bernard Frank, who made these discoveries while commissioned to develop cultivation methods for truffles by the King of Prussia. This wasn’t a true recognition of the interkingdom interactions however, since fungi were still classified as plants at this point. But research on viruses and bacteria was well underway at this time as well, both in the human diseases that were being characterized: 1874, Streptococcus; 1884, Staphylococcus and Corynebacterium diphtheriae; 1901, yellow fever virus. Microbial pathogens of plants were being discovered as well: tobacco mosaic virus preceded yellow fever virus by nearly 10 years in 1892.

But scientists didn’t want to focus solely on the pathogens. Particularly with regard to plants, scientists have been trying to find ways to more successfully grow crops through different cultivation conditions. Having long recognized the importance of root systems in acquiring nutrients from the soil, the importance of microbes surrounding these root structures was a relatively new idea as the field of microbiology took hold.

Enter scientist Lorenz Hiltner. Hiltner was an agricultural botanist, working to improve crop health and yield in his German institute. The institute where he worked, the Bavarian Agricultural-Botanical Institute, was the first to patent and provide Rhizobium inoculants to improve nitrogen acquisition (the inoculants were called “Nitragin”), and Hiltner did some of the pioneering work on legumes and the relationship of legumes with their Rhizobium symbionts within the root nodules of these plants.

Through his work with legumes, Hiltner believed that not only did the bacteria that surrounded plant roots help those plants acquire nutrients, but that the plants actively cultivated growth of beneficial bacteria through their root secretions. Having found bacteria within the rhizodermis of healthy roots, he reasoned that these bacteria were living in symbiosis with the plants, analogous to what had been discovered with fungal symbionts.

At first, Hiltner called these bacterial communities associated with plant root structure the bacteriorhiza, and he proposed some pretty sophisticated interactions between the plants and these bacteriorhiza, including that root exudates could recruit or attract specific bacteria and that these same secretions excluded what he called ‘uninvited guests.’ He hypothesized that “the resistance of plants towards pathogenesis is dependent on the composition of the rhizosphere microflora” — a concept that not only holds up today but is an area of active microbiology research.

In 1904, he gave a lecture, albeit in German, in which he states “in soil influenced by root (einflusssphaere der Wurzel), or within the ‘rhizosphere,’” which is the first recorded use of the word rhizosphere. Hiltner continued his work on the rhizosphere and soil microbiology, until his death in 1923. While many of his applications, including warding off seed phytopathogens, were used until the 1980s, this concept of the rhizosphere remains among his most influential and long lasting contributions to science.

Graciela Lorca talks about her work on citrus greening disease and the role of the microbiome in diabetes development.