END_OF_DOCUMENT_TOKEN_TO_BE_REPLACED

Timothy Sheahan describes his work on drug that can treat all coronaviruses, plus his work on the genetics of chronic hepatitis C virus.

Are there drugs that can treat coronaviruses? Timothy Sheahan talks about his drug discovery work on a compound that can inhibit all coronaviruses tested so far, and tells how his career path  took him to pharmaceutical antiviral research and then back to academia.

Even though the MERS-CoV was discovered as a human pathogen in 2012, it was likely percolating as a disease agent for a long time before that. Banked camel serum provides evidence that the virus had been circulating in camels for several decades prior.

Differentiated ex vivo lung cultures allow study of virus infection in a 3D model representation for studying viral infection, including target cell types of both MERS-CoV and SARS-CoV. Coronavirus disease in people takes place over a course of about 2 weeks. In mice, the disease is similar, but progression is faster, taking about 1 week.

The drug remdesivir (RDV) is a nucleoside analog that inhibits the coronavirus RNA-dependent RNA polymerase (RDRP). Remdesivir activity has not been tested against nCoV2019, but nCoV2019 similarity to other viruses is promising. Bioinformatic approaches show that the nCoV2019 RDRP is 99% similar and 96% identical to SARS-CoV RDRP. Remdesivir works against every coronavirus tested so far, including viruses with highly divergent RDRP sequences, so remdesivir is likely to be effective again nCoV2019. Experiments must still be performed before reaching this conclusion, of course.

Tim also hopes to discover the genetic determinants that will allow a chronic hepatitis C virus (HCV) infection in mice, but not standard inbred mice. He uses outbred mice meant to mimic the diversity of the human population, which will strengthen the results. Understanding these determinants would inform human studies to better understand chronic HCV infection.

“Even though the MERS-CoV was discovered as a human pathogen in 2012, it was likely percolating as a disease agent for a long time before that.”

“There’s so much genetic variability in coronaviruses, it’s hard to say what specifically is guiding the transition, say, from a camel virus to a human virus, but the main determinant of species specificity is the spike protein.”

“The proteins that decorate the outer part of the particle are the proteins that interact with the immune system; those are quite different and there is lower conservation in those between coronavirus species than the enzymes these species use to replicate the genome.”

“Remdesivir has been used in humans but for Ebola, so there's a lot of information about it. If you have an experimental drug treatment, you can do experiments in cell culture or in mice, but you still don’t know if it’s safe in people. Remdesiver has already gone through Phase I, so they already know it’s safe in people. It’s undergone safety testing and I think there’s potential for this to be used in China.”

“I don’t think we can ever stop developing antiviral drugs. If you look at the flu field, Tamiflu was a big deal but flu can gain resistance to Tamiflu. You really need to be thinking 2 or 3 steps ahead.” 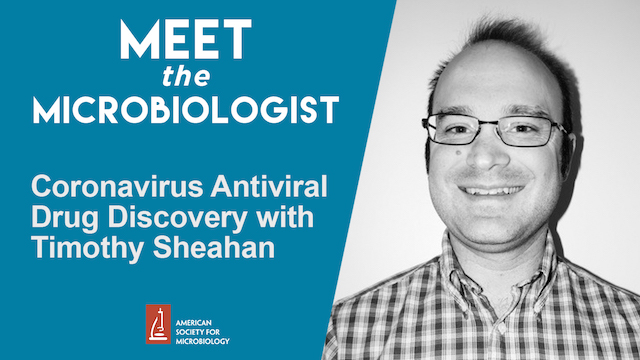 
When introducing someone to the genetic dogma for the first time, meaning when explaining how DNA becomes RNA becomes a protein product, I often preface it by saying dogma in biology is not exactly dogma. It’s a rule that most living things follow, but for every rule in biology systems, there is an exception. Rules in biology are more of a 90 or 95% of the time situation—and almost all of the exceptions are microbial. You probably see where I’m going with this, but Tim just spoke at length about an RNA genome virus that needs to copy its RNA genome, which it does with an RNA-dependent RNA polymerase. Exception number 1 in this system is that there is no DNA, which is pretty apparent, but to copy a positive-sense genome, RNA viruses must make a negative sense RNA template, from which they can make the entire positive-sense RNA genome again. So this is RNA to RNA, which isn’t even part of the genetic dogma. There are other, more complex exceptions, but the discovery of an exception after a dogma has been incorporated into the field made me wonder: who was brave enough to look for RNA-dependent processes in a DNA-crazy world?

Because when the molecular rules were being decoded, DNA was hogging most of the attention. This goes back to some of the first experiments looking at transforming factors when Avery, MacLeod and McCarty discovered that DNA was the transforming factor in Streptococcus pneumoniae transformations. The DNA craze continued in 1953, as the double helix was revealed by Watson and Crick, thanks to Franklin’s 1952 x-ray crystallography image. It wasn’t until the 1960s that RNA was found to constitute some viral genomes, which was discovered in a few labs around the same time.

Probably unsurprisingly to listeners of this show, one of those labs focused on phage-E. Coli interactions; interactions between phage and E. coli have revealed a lot of what we now understand about molecular biology. Notably, Charles Weissmann and Piet Borst, working at the New York University School of Medicine, were studying the MS2 phage. In 1963, they published their discovery that the MS2 phage RNA synthetase can produce double stranded RNA. But not all evidence for RNA-to-RNA synthesis came from phage.

Around this same time, an early-career scientist named David Baltimore was working on poliovirus, an RNA virus that infects human cells. Scientists had understood that the compound actinomycin D stopped RNA from being made in a cell but had no effect on poliovirus synthesis inside a treated cell. What we now understand is that actinomycin D didn’t inhibit viral replication because actinomycin D only stops RNA being made from a DNA template, but doesn’t inhibit RNA being made from an RNA template. By investigating this phenomenon in vitro, Baltimore discovered that the poliovirus RNA polymerase can also synthesize viral RNA, which he published in PNAS. The last paragraph of this paper reads:

Naturally, it took many scientists working on a similar problem from different angles to uncover the crack in the central genetic dogma as it was understood at that time, but these stories are some of my absolute favorites. Scientists who understand that the majority of the system works one way, but ask the question ‘what if’ about their system, to discover an entirely new biological process. Dogma is defined as a set of rules laid out by authorities to be incontrovertibly true. The take-home of this story is to understand that scientific discoveries come when these rules are questioned, and whenever you learn a rule in biology, you should wonder where the exceptions are.

If the name David Baltimore sounds familiar, it should! Baltimore published his findings in poliovirus and the rodent virus mengovirus as an early-career scientist, but continued to question central genetic dogma, and was one of the scientists to discover that some viruses can turn their RNA genome into DNA using viral reverse transcriptase, for which Baltimore won the Nobel prize in Medicine. Among his other contributions, he also created the Baltimore classification system of viruses, and was a mentor to Earth’s virology professor, Vincent Racaniello.

Timothy Sheahan describes his work on drug that can treat all coronaviruses, plus his work on the genetics of chronic hepatitis C virus.