END_OF_DOCUMENT_TOKEN_TO_BE_REPLACED

Alfredo Torres discusses the different types of E. coli and the methods his lab is using to develop vaccines against pathogenic E. coli and Burkholderia.

E. coli plays many roles inside and outside the scientific laboratory: The pathogenic E. coli associated with diarrheal disease are the ones named for their O-antigen and flagellar H-antigen, such as O157:H7. There are about 30 E. coli strains with various combinations of O-H factors known to cause diarrheal disease in people.

The E. coli Shiga toxin (though not the bacterium itself) can pass through the epithelial cell layer to become systemic, and eventually the toxin will accumulate in the kidneys. This can lead to patients experiencing hemolytic uremic syndrome (HUS) and kidney failure, leading to lifelong dialysis or need for a transplant. An immune response that prevents the E. coli from attaching will prevent the bacterium from secreting toxin in close proximity to the epithelial cells and decrease likelihood of HUS development.

Burkholderia is a bacterial genus whose member species have been weaponized in the past, and which remain potent disease-causing agents around the world.
Coating gold nanoparticles with antigens against which the immune response will be protective is a method Alfredo has used for a number of candidate vaccines, including one against E. coli and one against B. pseudomallei. The nanoparticles can have the gold cleaved off to provide different functional variants of the same vaccine.

"Within the big family of Enterobacteriaceae, there are several other members that are more prone to acquire antimicrobial resistant markers [than E. coli]: Klebsiella and several other organisms. We are reaching a point where all the antibiotics that we know are not working against some of these isolates. The alternative is to try to develop a vaccine that targets not one, but multiple components of the bacteria so there is less probability that the bacteria mutates to become resistant to that vaccine."

"The way I think is to find the factors that allow the bacteria to become pathogenic."

"One of the jobs at my institution is to be the Chief Diversity Officer. One thing I try to implement is small changes: I always say it's with one faculty at a time that you can make a change. If we can do this, that one microbiologist can sponsor an underrepresented minority student and mentor them to become scientists, then we can have a grassroots movement."

"You need to be passionate about what you do, because one thing that is complicated in science is how many times you'll be told no. [Scientists] learn how to take those negative responses and try to make it a positive response." 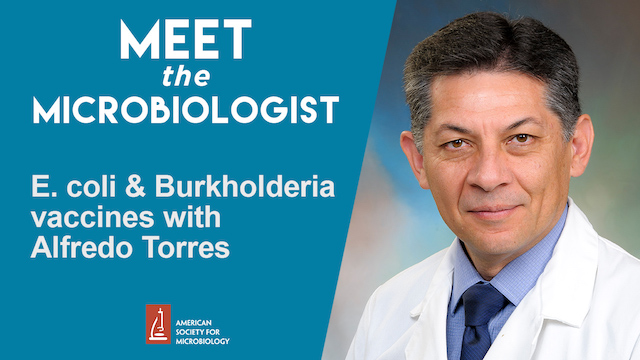 
There are so many potential E. coli-related avenues to go down when discussing the history of microbiology! One could talk about the scientist for which the bacterium is named, the German bacteriologist Theodore von Escherich, or some of the numerous outbreaks, like the 2011 outbreak in Germany that Alfredo mentioned, or the 1993 Jack-in-the-Box outbreak – d you remember that? But for today's history of microbiologist tidbit, we'll cover the scientist for whom the toxin is named: Japanese bacteriologist Kiyoshi Shiga.

Shiga was born in 1871 in Sendai, in northern Japan. After starting medical school in 1892, he went to a lecture by Shibasburo Kitasato, another Japanese scientist and one whom had studied with prominent bacteriologist Robert Koch. After finishing his medical studies, Shiga became a research assistant at the Institute for Infectious Diseases which had been founded by Kitasato. In 1897, Shiga was told to begin studying a dysentery outbreak, which over the course of the outbreak would infect over 91,000 people and kill nearly 20,000. Dysentery at this time generally meant any violent case of diarrhea, and the Japanese word for the outbreak, sekiri, may be a better name. The word sekiri means "red diarrhea," which more accurately describes the bowel movements accompanied by blood and mucus seen in shigellosis infections.

If you recognized the name Koch, you're likely familiar with Koch's postulates. These postulates are those by which a microbe is determined to be the cause of an infectious disease: Of course, there have been many complications to these postulates, such as unculturable microorganisms, co-infections leading to emergent properties, etc, but at this time, the turn of the 20th century, new disease-causing microbes were just starting to be identified due to the recent outlining of these postulates.

So Shiga studied sekiri patients in order to perform the first of these. He isolated a Gram-negative bacillus that caused diarrhea when fed to dogs. But how could Shiga demonstrate that the re-isolated bacillus was the same as the one he had infected the dogs with, and not a contaminating microbe? There were no sequencing techniques or molecular tags to identify specific bacteria.

Shiga turned again to the dysentery patients, looking at their serum. Serum antibodies from the patients would bind the purified bacteria together, allowing a bacterial clump to precipitate out of solution. Of course, this was before antibodies were well characterized, but the immune sera were known to contain various components that would react against microbes which had previously caused disease. When patient sera was applied to the bacterial isolates from the sickened dogs, the same precipitation even occurred, indicating that the sera recognized the same bacteria they had previously seen in the patients. This was the confirmation Shiga needed in order to complete Koch's postulates.

The bacterium identified was given the genus name Shigella, after its discoverer. Incidentally, this name was bestowed much later by bacterial taxonomists in the 1930s, as Shiga himself called it Bacillus dysenterie because of the bacterial shape. Shiga went on to describe the toxic factors that allowed the bacterium to cause disease, including Shiga toxin.

How did Shiga toxin from Shigella make their way into the Shiga toxigenic E. coli we discussed today? Some evidence exists that this gene was carried by a bacteriophage, which must have been a somewhat broad phage as it would have been generated from a Shigella bacterium and infected an Escherichia bacterium. These 2 bacteria are very similar—many scientists refer to them as cousins—but classically differ in other characteristics like motility and metabolic ability as well

Alfredo Torres discusses the different types of E. coli and the methods his lab is using to develop vaccines against pathogenic E. coli and Burkholderia.