END_OF_DOCUMENT_TOKEN_TO_BE_REPLACED

Mary Estes talks about her work on rotavirus and norovirus, including her discovery of the first viral enterotoxin and her current use of enteroid “minigut” models.

Viral gastroenteritis around the world causes 200,000 deaths globally each year. Mary Estes talks about her work on 2 gastroenteritis-causing viruses, rotavirus and norovirus, and tells the story of her discovery of the first viral enterotoxin. She also describes how noroviruses have changed from human volunteer studies to studies using “miniguts,” a system now used with many enteropathogenic microorganisms.

Rotaviruses and noroviruses kill 200,000 people annually, despite an available rotavirus vaccine and current anti-infective measures. Rotavirus is generally associated with gastrointestinal disease in the very young and the very old, while norovirus infects people at all life stages.

Rotavirus is so stable that even when viral samples are extremely dessicated by lyophilization, the samples remain perfectly infectious. Rotavirus stability is largely due to 3 concentric capsid cells.

NSP4 is a rotavirus enterotoxin, and the first viral enterotoxin to be discovered. It affects the concentration of the intracellular calcium pools. By activating the calcium chloride channel, NSP4 forces chloride and water to be excreted, directly leading to diarrhea. NSP4 is secreted from infected cells and can also disrupt calcium concentrations of neighboring cells, amplifying the effect of a single infected cell.

Human enteroids, or “miniguts,” offer insight into complex virus-cell interactions. These stem-cell derived miniguts can be generated from different types of animal stem cells, and the enteroids they become reflect the same host-barrier restriction as the animal of origin. The miniguts can be used to culture many sorts of viruses and other microorganisms, such as bacteria and protozoa.

“Many bacteria cause more illness in developing countries [than in developed countries]. In those cases, where you improve hygiene and have clean water that people can drink, you can eliminate many of the bacterial species. But the viruses are quite robust and survive nicely and can infect people around the world.”

“Norwalk-like virus is named such because the first outbreak of viral-caused gastroenteritis was in a school in Norwalk, Ohio, so they named the virus Norwalk virus.”

“The prototype Norwalk virus strain only infects people who make specific sugars...amazingly, the way we were able to start studying the molecular biology of Norwalk virus came by doing volunteer studies or human infection studies. We were able to put people in the hospital and feed them a preparation of noroviruses and they would get sick. A subset of people never get sick, and eventually we figured out that the people who never get sick don’t have these particular sugars because of their genetics.”

“You’ve probably met someone who’s said you to, ‘I never get sick. I never get gastroenteritis.’ Sometimes you wonder is that person telling the truth? But in fact there are people who never get sick because these people are nonsecreters [not susceptible to noroviruses].”

“I tell people to read broadly and one of the reasons for doing that is an example from my own career. Our work on minigut cultures came from my reading articles in other journals. This was a technology not developed for studying infectious diseases, but developed because people were interested in intestinal stem cells...if I only read virology articles, I never would have learned about that technology.” 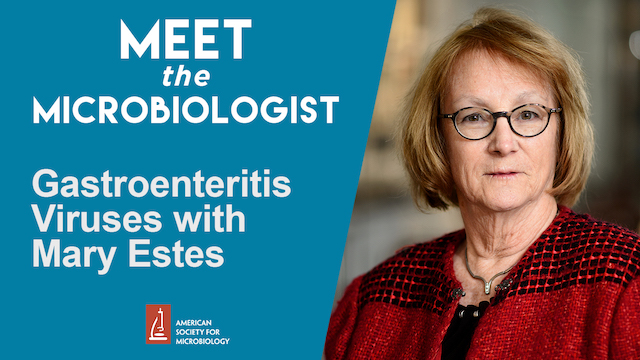 
In today’s history of microbiology tidbit, I want to share a story I just learned about another virus transmitted in contaminated food and water: polio virus. In my conversation with Mary, I brought up poliovirus as an example of one that scientists and public health workers have the ability to eliminate in most areas of the world via vaccination, in part because the virus has no animal reservoir. You may recall more in-depth discussions about polio virus research in previous episodes with microbiologists Julie Pfeiffer or Vincent Racaniello.

Polio historically received a lot of research attention in part because it can have severely debilitating consequences in a small proportion of people who are infected with poliovirus. Many microbiology-oriented folks know about the Salk and Sabin vaccines, and the work of Jonas Salk and Albert Sabin to generate these vaccines; on a previous HOM tidbit, I’ve highlighted some of the lesser known scientists who contributed to polio vaccine research, including Isabel Morgan and Dorothy Horstmann. Today I want to highlight the work of an industrial hygenist who saved the lives of many polio sufferers by inventing the iron lung that kept them alive, a man named Philip Drinker.

Philip Drinker was an expert in industrial illumination and ventilation, which he taught at Harvard Medical School. In addition to inventing the iron lung, Drinker contributed experiments to determine the gas mixture necessary for a rescue operation of a sunken submarine, the USS Squalus, and he also advised the Atomic Energy Commission. He was Editor-in-Chief of the Journal of Industrial Hygiene for over 30 years. Industrial hygiene is a field analogous to occupational safety and promoting safe conditions for workers given fields, and I like to think that Drinker’s expertise in ventilation and the more recent research findings regarding the microbiota that we are exposed to indoors would have him nowadays concerned with the microbiome of the built environment, and how this might affect industrial hygiene. However, of all these accomplishments, Drinker is best remembered for his contribution of the iron lung.

A recent Forbes article highlighted Drinker’s role in the discovery, and here I’ll read from the article.

“It was an ordinary day in the late 1920s, and Drinker had stopped by a children’s hospital to consult on a problem with its air conditioning system – not to rescue the dying children with paralyzed diaphragms, unable to even take a breath after the polio virus had its way with their spinal cords. But the sight stayed with him.

“He could not forget the small blue faces, the terrible gasping for air,” [wrote his sister Catherine] Bowers. Drinker also realized that victims of coal-gas poisoning, and a handful of other conditions, needed a similar solution. By 1928, he had designed and built a machine to replace patients’ paralyzed diaphragms: a negative-pressure ventilator, although the world would call it an iron lung. The pressurized metal cylinder would surround the patient. When the air pressure inside dropped, it would cause the patient’s chest to expand, drawing air inward. Increasing pressure in the cylinder would press on the patient’s chest, gently forcing an exhalation.

When Drinker and his colleagues carefully placed an 8-year-old polio victim in the cylinder, she began breathing normally (with the machine’s help) within seconds. By the 1940s and 1950s, as the polio epidemic in the U.S. and elsewhere reached its devastating peak, rows of iron lungs filled hospital wards, keeping paralyzed patients alive. Most young patients with respiratory paralysis only needed to spend about two weeks in the machine, but some relied on – and lived in – the iron lung for years or even decades.”


At the height of the polio epidemic, nearly 20,000 people each year, mostly children, experienced polio-induced paralysis. Today, only 3 people remain alive who require an iron lung due to a childhood polio infection, one of whom is 74-year old Paul Alexander. Alexander has used an iron lung since he was 6 years old, and he was featured in a 2018 Dallas Morning News story, in which he describes experiencing life while dependent on this machine (linked above).

Mary Estes talks about her work on rotavirus and norovirus, including her discovery of the first viral enterotoxin and her current use of enteroid “minigut” models.