END_OF_DOCUMENT_TOKEN_TO_BE_REPLACED

George F. Gao talks about his role as Director of China CDC, his structural virology research, and the importance of both basic and applied research.

George F. Gao discusses how China CDC promotes global public health during outbreaks SARS and Ebola. He also talks about running a structural biology lab, the importance of both basic and translational research, and the most important discovery of the 20th century.

China CDC was founded in 2001. Its experience with the SARS outbreak informed its response to the western Africa Ebola outbreak in 2014-2016, having learned that viruses don’t care about national borders and can quickly become an international problem. Responding to any major outbreak serves both altruistic and selfish motives, since quelling the outbreak decreases the chance that the disease will continue to circulate, potentially reaching your country.

Basic research is fundamental for many translational applications to improve human health. By measuring the mutation rate, for example, of a circulating virus, scientists can determine if previous isolates can be used to generate vaccines. The basic research that led to new nucleic acid sequencing techniques has many important applications!

When asking other scientists what the most important discovery of the 20th century is, many biomedical scientists name the discovery of the double helix. George points out that bird migration patterns have influenced our understanding of avian diseases like the flu. This discovery led scientists to understand more about the annual transmission patterns of flu, highlighting the importance of interdisciplinary research.

George has a foot in both basic and translational sciences and is an ardent supporter of both. The difficulty is in identifying basic research that has potential for application and providing opportunities to basic researchers to create companies and products based on their research. Another hurdles is collaborating and coordinating to ensure people talk to each other

“If you are doing something in public health or medical research, you should go to the field. That tells you where the problem is, what are the major issues, and what is the hurdle for implementation of public health measures.”

“Data sharing nowadays is very important for public health; there’s no argument. Influenza virus is a very good example. The 2009 pandemic initiated in Mexico and then California, and from there to all over the world. If we don't’ share the data, the virus itself will share the data.” 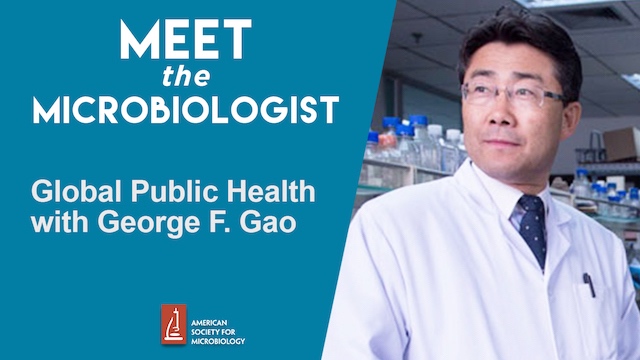 
Adding layers like learning these migratory bird patterns or deciphering the structures of viral proteins illustrates just what an iterative process scientific discovery really is. In today’s history of microbiology tidbit, I want to highlight an article that recently went up on the asm website titled Forging the Trail for a Polio Vaccine: Isabel Morgan and Dorothy Horstmann. The article discusses some of the research that formed the foundation in our fight against another deadly viral pathogen, polio virus. The following is taken directly from the piece:

During the years leading up to the development of the polio vaccine, scientists actively debated whether a killed/inactivated virus could induce sufficient immunity to protect against polio infection. While inactivated virus vaccines for influenza were in use by 1945, multiple studies of inactivated polio vaccines failed to demonstrate protective effects when tested in primates and humans. The disease’s unusual presentation and unique pathogenesis bred confusion, and conflicting study results lead scientists in different directions.

The problem was in part that scientists did not have a firm understanding of where the poliovirus replicated within host tissue. Preliminary evidence pointed simultaneously to the gastrointestinal tract, respiratory tract, and the central nervous system, which made establishing a vaccine delivery system difficult.

The work of 2 scientists helped to resolve these debates and facilitated the development of both an oral vaccine formulation and a killed/inactivated microbe-based vaccine. Amongst many other celebrated scientists and physicians, the works of Isabel Morgan of Johns Hopkins University and Dorothy Horstmann from Yale University were paramount to the vaccines’ success.

Polio was a significant and widespread concern throughout the early lives of Morgan and Horstmann. Both scientists were born in 1911, just a few years before the 1916 polio epidemic in the United States, which resulted in approximately 6,000 deaths and thousands of cases of paralysis. To this day, there is no cure for polio and prevention via vaccination is the only effective defense against disease transmission.

Morgan’s research focused on the development of immunity to polio viruses, using a primate infection model. Her work led to the discovery that poliovirus includes 3 distinct serotypes: type 1, type 2, and type 3, all of which are considered wild-type viruses and must be incorporated as vaccine components for infection prevention. Previously tested inactivated vaccines in the 1930s consisted of only one type of poliovirus, which contributed to their ineffectiveness. Morgan’s discovery was a crucial turning point in understanding host immunity to polio, as polio vaccines containing only 1 virus subtype would not offer complete immunity against the infection.

Morgan’s work also focused on developing a killed-virus for use in vaccinations. Morgan tested this hypothesis when she transferred antibodies from monkeys injected with killed-virus into healthy monkeys and challenged them with live polio virus. In doing so, she determined a threshold amount of inactivated virus inoculum was needed develop protective immunity, requiring multiple immunizations. Since boosters are generally unnecessary when using live vaccines, which were better understood at the time, researchers had not yet tried multiple dosings. Morgan’s findings explained why you need “booster” doses of the inactivated polio vaccine. Her work also validated an existing method for inactivating the virus using formalin, later used by Salk, and she experimented with a vaccine adjuvant mixture to enhance antibody response. These were significant breakthroughs in polio vaccine development, as killed virus vaccines are easier to produce and are more stable, providing advantages for large-scale manufacturing and distribution.

This piece does an excellent job demonstrating the role these scientists played in upending the scientific thinking at the time and illustrating the basis of major scientific breakthroughs, like the Salk vaccine, on the research of so many additional scientists.

George F. Gao talks about his role as Director of China CDC, his structural virology research, and the importance of both basic and applied research.