END_OF_DOCUMENT_TOKEN_TO_BE_REPLACED

Influenza is famous for its ability to mutate and evolve but are mutations always the virus’ friend? Jesse Bloom discusses his work on influenza escape from serum through mutation and how mutations affect influenza virus function and transmission.

Influenza is famous for its ability to mutate and evolve through two major mechanisms: Avian influenza has caused thousands of zoonotic cases, in which the virus is transmitted from birds to people. This causes serious disease but the virus doesn’t easily pass from person-to-person, limiting how many people are affected. When a zoonotic case becomes easily transmissible between people, as is suspected occurred in the 1918 influenza pandemic, the outcome can be very serious for many, many people.

During antigenic drift, the virus accumulates mutations randomly throughout its genome. Mutations in the hemagglutinin (HA) glycoprotein gene are the mutations most likely to affect the ability of antibodies to attach and block HA during viral infection of a new host cell. The circulating human H3N2 influenza A virus accumulates approximately 3-4 mutations annually within its HA gene, representing a 0.5-1% change. On average, it takes 5-7 years of these mutations accumulating until a viral strain can reinfect a previously infected person.

The changes in the influenza sequence are responsible for waning immunity against the annually circulating strain. This was demonstrated when a flu strain from the 1950s was inadvertently reintroduced in the 1970s; older people who had previously been infected were protected against this exact same strain.

“[Influenza jumping from animals to humans] is not really unique about flu: the flu’s just another virus that jumped into humans. What’s unique about influenza is that it jumps into humans a lot.”

“Scientists did experiments with a single antibody and were able to find viruses that could escape that one antibody. But what does this look like in actual human immunity? As everyone knows, one of the remarkable features of our immune system is it can potentially make many different antibodies, and it’s not clear how the virus could escape from all those antibodies at once.”

“When we think about evolution in general, one of the simplest ways to think of it is the well-mixed environment. If you’re a scientist and you’ve grown bacteria in the lab, you’ve used a flask so that every bacterium has seen the same environment. Is flu, as it’s passing from person to person, seeing a constant environment? Is the selection pressure when the virus infects me the same as the selection pressure when the virus infects whomever I sneeze on when I’m on the bus? (Obviously, I’m very careful and wouldn’t sneeze on someone on the bus!) We found the serum of different people is selecting different mutations. The environment that flu sees as it transmits from person-to-person is quite different.”

“Historically, evolution was one of the more ‘academic’ disciplines. Virology is considered much more applied because you’re studying something that makes people sick whereas evolution is a bit more abstract. I think that’s really starting to change because we have so many tools in genetic and we can look at so many things at very high resolution and really see things changing. Evolution is taking on a lot of real-world importance and real-world practicality. Evolution remains this fascinating intellectual topic plus it is increasingly relevant to human disease.” 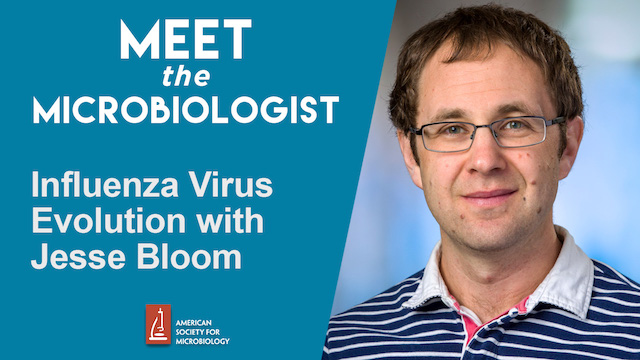 
One of the viruses that Jesse compared influenza virus to is the measles virus. Both have jumped from animals into people, but measles virus is thought to have only done this once. When was this? How do we know?

Measles is a morbillivirus, a genus of viruses that contain a number of animal-infecting viruses, including rinderpest virus, a cattle pathogen. The measles virus itself was discovered by Thomas Peebles from a throat swab of a sick 11-year-old boy. Sidenote: Peebles’ boss, Nobel Prize winner John Enders, thought an early-career Peebles was unsuccessful and so Enders removed Peebles from the measles research; it was only by conducting his own independent experiments that Peebles was able to pinpoint the measles virus as the cause of the disease. So persevere, young scientists!

Measles is a relatively recent addition to human pathogens. Disease historians at one point had attributed the Antoinine Plague that occurred in the year 165 to measles based on descriptions of its symptoms and transmission, but this was shown to be unlikely. One of the studies that discounted measles in this nearly 2000-year-old epidemic was due to a report published in the Virology Journal in 2010, in which Yuki Furuse, Akira Suzuki, and Hitoshi Oshitani looked at the origins of measles using the measles virus molecular clock. This is a method that takes into account the nucleic acid substitution rate in the viral genome, which is relatively constant over time within an organism, though of course that rate can vary a lot between different types of organisms.

Previously, scientists had estimated measles emergence thought descriptions of ancient plagues like that Antoinine Plague, along with mathematical models of the human population size necessary to sustain disease transmission — after all, humans haven’t lived in concentrated urban centers for most of human history. But this molecular work suggests this Antoinine Plague may have been a virus that causes similar symptoms, such as smallpox. The authors comment on their work and this new estimated emergence date (and here I’ll read from the discussion):

In the prevaccine era, over 90 percent of children is infected with MeV by age 15. Nevertheless, measles has been rarely described earlier. An increasing number of descriptions of measles in the 11th and 12th centuries may reflect the emergence of MeV in human populations at that time. Linguistic evidence suggests that the disease was recognized before the Germanic migrations but after the fragmentation of the Roman Empire, i.e., between 5th and 7th centuries. This age is still within 95% credible intervals of our results. Alternatively, a common ancestor of MeV and RPV may have caused zoonosis in the past; the archaeovirus can infect both humans and cattle. Even if the earliest urban civilizations in ancient Middle Eastern river valleys (around 3000 to 2500 BCE) were infected by an ancestor of the current MeV, the virus probably had different characteristics from the current MeV.
The authors conclude by emphasizing the importance of studying measles with an evolutionary perspective, one I think our guest today would agree with.