END_OF_DOCUMENT_TOKEN_TO_BE_REPLACED

Denise Akob discusses her research in biogeomicrobiology combining life science and earth science to study both contaminated and pristine environments.

Denise Akob discusses her studies of microbial communities of contaminated and pristine environments using life science and earth science techniques. She discusses how to figure out “who’s there,” how to optimize select natural microbial activities, and her career path into government research.

Biogeomicrobiology straddles the life science and earth science fields. This is a growing area of research in the academic setting as well as in the private sector, where one can contribute to hydrogeology or bioremediation efforts.

What happens on the surface when extracting resources like natural gases? Wastewater from hydraulic shale fracking, or fracking, can contaminate microbes. Preliminary data suggests that microbes that thrive in that wastewater can be a fingerprint for surface contamination, and this is one of the areas of active research in Akob’s lab. Additionally, microbes can respond to contaminants to remove that risk and remediate the spills.

One trip to the field can provide samples for years of analysis. From one sample, scientists can conduct:

Akob asks how to make natural microbial degraders happy. For example: acetylene, a triple-bonded carbon compound, can inhibit degradation of chlorinated solvents, a potent groundwater contaminant. By studying the microbes that use acetylene as a primary energy source (acetylenotrophs), this removes this inhibition caused by acetylene and the chlorinated solvent-degraders can increase their activity.

Akob studies pristine environments to understand natural microbial communities. A cave she studied in Germany was ‘ultra pristine,’ discovered while building a highway. Understanding natural processes, such as the biomineralization promoted during stalagmite and stalactite formation helps scientists imagine how to use tehse processes in other applications.

“I've encountered earth scientists who have claimed that microbes can't live there [in deep sediments of the earth] or that during geologic history, these reservoirs got too hot. The reality is, microbes don’t read the textbook; they do what they're gonna do, and we're going to learn and maybe someday learn from them.”

“Microbial forensics are important, because how do you track whether a contamination event has happened? This is something environmental scientists need to know, especially in an environment where accidents happen. Chemical markers can be used as forensics, but what about microbes?”

“Spills of wastewaters are complex—any type of wastewater, but especially those of oil and gas wastewaters, they have very complex chemistries. If we can harness the power of microbes to clean up some of that complex chemistry, that leaves other problems that can be solved, and simplifies some of the other technologies or strategies that might be used to address the problems.”

“I was introduced once as someone who works in microbes 'in everything.' I think in a way, that's true. In my career, I’m not going to be known as the scientist who worked on only one element. What makes me a strong scientist is bringing this interdisciplinary thinking to a lot of different problems. What I'd like to be known as is someone who has a robust approach to science.” 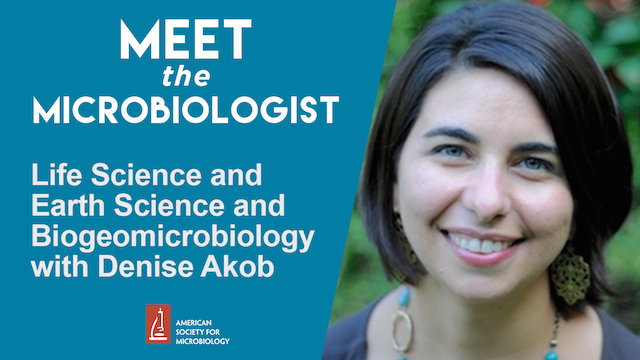 Here in the United States, there are several caves reserved for scientific research. One of these is Lechugilla Cave, part of the Carlsbad Caverns National Park in New Mexico. Much like the cave Denise referenced, the discovery of Lechugilla was serendipitous -- a much smaller cave had been known as Misery Hole was known until the 1950s, when wind roaring from the cave floor provided a clue to a much larger space. This led to the uncovering of over 138 miles of passages, making Lechugilla the 4th-longest cave in the United States.

Scientists studying microbes from this cave have made some truly mind-blowing discoveries. Despite its isolation from the surface ecosystem, a number of antibiotic-resistant bacterial isolates have been discovered, including the 2016 report of a Paenibacillus isolate resistant to most clinically relevant antibiotics. By finding the genetic elements that confer this resistance, researchers identified sequences without previously characterized homologs or mechanisms, making this Paenibacillus isolate quite unique.

While perhaps surprising, this discovery makes more sense when one looks a bit closer. After all, what are antibiotics but compounds produced by microbes to help them eliminate competing microorganisms? And while the Lechugilla cave microbes may not have been exposed to antibiotics in a clinical setting, they have been exposed to the other microbes within the cave ecosystem, some of which may be producing antibiotic compounds identical or similar to those we know and use. In fact, this explanation is one suggested by Barton when discussing the discovery, when she said that “To find high levels of resistance really argues that [naturally occurring] antibiotics are being lobbed around all over the place, presumably through resource competition.”

What other discoveries lie waiting to be unearthed in the Lechugilla cave and other pristine environments? What makes this an apt history tidbit is not necessary the actual research discoveries, which are relatively recently published and will continue to increase our understanding of natural microbial products and processes as scientists analyze these field samples, but the long history of these environments themselves - in the case of Lechugilla, a setting that hadn’t been exposed to the surface environment for 4 million years. The discovery of 100-million-year-old bacteria this past year, discussed in wonderful detail in a recent This Week in Microbiology episode, is yet another example of how much we have to learn from the ancient natural world, and the importance of preserving these pristine environments.

I’ll also briefly note that Hazel Barton is one of the editors of the wonderful Women in Microbiology book, a collection of microbiological contributions by amazing women microbiologists.

Denise Akob discusses her research in biogeomicrobiology combining life science and earth science to study both contaminated and pristine environments.