END_OF_DOCUMENT_TOKEN_TO_BE_REPLACED

Linda Kinkel describes the important relationships between plants and microbes and her research on Streptomyces that protect against plant pathogens.

How can the intricate relationship between soil microbiota and plants be managed for improved plant health? Linda Kinkel discusses new insights into the plant rhizosphere and the ways that some Streptomyces isolates can protect agricultural crops against bacterial, fungal, oomycete, and nematode infections.

Rhizosphere soil is soil closely associated with the root and is distinct from rhizoplane soil that directly touches the root. The endophytic rhizosphere are those microbes that get inside the root. Many scientists view these communities as a continuum rather than sharply delineated.

Plants provide necessary carbon for the largely heterotrophic soil microbiota, and these microorganisms help the plants in several ways too:

Through a University of Minnesota plant pathology program, potatoes were passaged in a field for over 2 decades to study potato diseases. Over time, researchers found fewer diseases in test crops, which led the plot to be abandoned in the late 1970s. In the 1980s, Dr. Neil Anderson planted potatoes to see if they would develop disease, but neither Verticillium wilt nor potato scab developed among the plants. Soil from the field (and on the potatoes) contained Streptomyces isolates that showed antimicrobial activity against bacteria, fungi, nematodes, and oomycetes. This discovery led Neil, new University of Minnesota professor Linda, and their collaborators to study the antimicrobial activity of natural Streptomyces isolates from around the world.

Inoculation quickly adds specific microbial lineages to soil microbiome communities. Alternatively, land can be managed by providing nutrients to encourage the growth of specific species, like Streptomyces, within a given plot, but this takes longer to develop. How are soil microbiomes inoculated? Microbes can be:

“Soil and sediment cover the entire earth. In the soil, especially in rich soils with rich plant life, you have billions of microbes. A single gram of soil, about the size of the tip of an adult pinky finger, can have 108 or 1010 genomes of microorganisms. These include lots of bacteria, fungi, oomycetes, and viruses that are abundant especially within bacterial and fungal cells. Soils and sediments across the globe are an incredible repository of microbial life.”

“Not only temperature, but the plant host, the cultivar, the moisture, whether you’ve added phosphorus or nitrogen or potassium in agriculture, whether or not a big herbivore has urinated in a spot on soil—all of these things contribute to the tremendous temporal and spatial heterogeneity that we see at very large and even at very small spatial scales in soil, because the soil microbial communities are just exquisitely sensitive to the full array of biotic and abiotic factors that you can measure in a soil habitat.”

“Sequencing has driven incredible advances in understanding but most of us have not left culturing behind.”

“If you think about organisms that we’ve tended to simplistically categorize as pathogens, many of these exist in some broad continuum of pathogenicity within some set of biotic and abiotic conditions but in association with a different host, different soil, different microbiome, may serve a radically different functional role in that soil microbiome. As a plant pathologist, we realize we need to take a more nuanced view of microbial taxa and their role in ecosystems.” 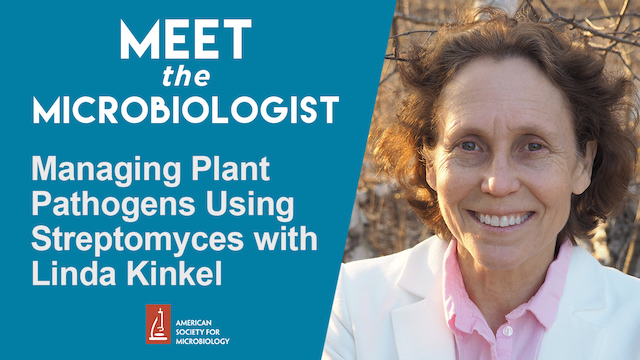 I was also glad to have the diversity of microorganisms discussed with Linda’s highlight of Phytophthera and the oomycete branch of microbes. In today’s history of microbiology tidbit, I want to explore a bit more about what scientists have learned in the 150 years since the Great Irish Famine about the oomycete that caused it, Phytophthera infestans.

The Great Irish Famine is named such because of the widespread infection of the staple potato crop in Ireland, which began in 1845. The effects of Phytophthera weren’t limited to the Irish island however, with crop failures in Europe preceding and following, particularly in northern Europe and Scotland; the 1840s are sometimes referred to as the Hungry Forties for this reason. Most Irish families depended on their potato crop to feed their families, in part because policies of the ruling British officials only allowed very small plots for home and garden. The small space meant that there wasn’t a lot of hearty produce that could be grown that would fill the bellies of the family, so most families turned to potatoes, which is why the blight was especially devastating in Ireland.

Where did the blight come from? A 2013 study published in eLife used microbial genomics to trace the history of the isolates which were held in various repositories. In addition to 11 historic samples from Ireland, Great Britain, continental Europe and North America, the scientific team sequenced 14 modern strains from Europe, the Americas and Africa. Changes in the DNA sequences and calculations based on the mutational rate for the organisms allowed the scientists to trace the origins of the European isolates to North America, with Mexico as the proposed origin. In 2017, a PLoS One study that included 66 historic and 116 modern specimens from North, Central, and South America also suggested that the famine strain of P. infestans had moved from Mexico to the United States before crossing the Atlantic to reach Europe, but this study extended the origins down to South America. The take-home message is that a lineage found in Central and South America before being introduced into several geographic areas of the United States in the early 1840s, before migrating to Europe to cause widespread disease in the potato crops there.

What about the responses of the scientific society during the time of the blight outbreaks? Remember this predates the discovery of the germ theory of disease by Koch but that there is a growing sense among the educated that sanitation is important to ward off disease. Like the onset of any outbreak, there were gatherings of experts to try to find a solution. In researching this topic, I found a 1965 historical piece that summarizes the scientific societies of the time:

“The epidemic broke out at an awkward time for the learned societies. Some, like the Société Royale d'Agriculture de la Généralité de Paris, were summoned back by ministerial demand from their summer holidays to urgent special sessions; the remainder made up for lost time when they reassembled in the autumn. Many set up special committees to examine and to experiment on the disease, and, in due course, to add to the Voluminous and perplexed reports which were emanating from officially inspired commissions in Belgium, Holland, France and Ireland. But it was the pamphleteers who had the real field day. An eruption of brochures broke out all over Western Europe, written by physicians, surgeons, botanists, noblemen, pharmaceutical and other chemists, geologists, cxcisemen, gardeners and accountants ; even a plain housewife added her modicum of wisdom. Many of these pamphlets put forward highly eccentric views, but few were without useful factual information.”

The piece goes on to discuss coverage of the outbreak in the local media:

“The advent of potato blight in Ireland was announced simultaneously, on September 6, in brief paragraphs in the Waterjord Freeman and the Dublin Evening Post. On September 13, Dr. John Lindley, impressed by the advanced stage of destruction of the potato crops in the London area, stopped the press to announce the grim news from Ireland in the Gardeners' Chronicle. In Ireland itself, however, the newspapers and journals, irrespective of their political allegiances, tended in the earlier weeks to play down the disease, and it was not until considerable tuber rot was noted at harvest time in October that the popular panic spread to the Irish newspapers.”

Since I’m speaking to you in March 2020, as COVID-19 is spreading around the world, I think the human reaction to the outbreak is particularly striking.

The 1965 article makes mention of suspected blight origins in Mexico or the Andes, though those citations aren’t available online. But the speculation in this article, and the continued efforts through the 2010s, raises the question: why does it matter to find the origins of this Phytophthera strain, anyway? Why are scientists trying to understand the origins of an outbreak that occurred 150 years ago?

The answer comes in how scientists monitor the modern populations of Phytophthera. As Linda spoke about in the episode, the ideas of plant pathogens are changing to become more context dependent, but given the right microbial lineage in the right conditions meeting the right plant, and it can infect to cause disease. Understanding how Phytophthera migrated—assumably relatively slowly, given possible transportation methods at the time—and how its genetic makeup changed through recombination, mutation or horizontal gene transfer, can help modern scientists aware of the genetic makeup that made this lineage such a potent plant pathogen. They can predict how quickly a soil organism can move, and hopefully start infection control disease outbreaks faster, given the ability to monitor and prepare for these outbreaks.

We are all experiencing what happens in the human population when monitoring and preparedness for potential emerging diseases becomes lax. When a disease hasn’t affected anyone in a long time, it’s easy to cut funding or programs to prepare for that disease. If the human health monitoring systems suffer from lack of funding, imagine the situation for plant health monitoring. There are huge ramifications for our food systems when disease does strike, and facilitating plant-microbe studies is important for anyone who enjoys eating food.

For a more detailed look into an outbreak that is hard to control, keep an eye on your mailbox for the next Microcosm issue, which contains an article about the banana plant pathogen Fusarium (the same Fusarium mentioned today). If you don’t receive Microcosm, that may be because your ASM membership has lapsed. You can renew your membership at asm.org/join to receive our member-only magazine that is also only available in hard copy.

Linda Kinkel describes the important relationships between plants and microbes and her research on Streptomyces that protect against plant pathogens.