END_OF_DOCUMENT_TOKEN_TO_BE_REPLACED

Microbial interactions drive microbial evolution, and in a polymicrobial infection, these interactions can determine patient outcome. Deb Hogan talks about her research on interkingdom interactions between the bacterium Pseudomonas and the fungus Candida, 2 organisms that can cause serious illness in cystic fibrosis patients’ lung infections. Her research aims to better characterize these interactions and to develop better diagnostic tools for assessing disease progression and treatment.

Is there a lung microbiome? A number of studies have looked at the microbial DNA of healthy individuals in lavage fluid. These studies provide evidence for microorganisms having once resided in the lung, but whether they were alive or how long they had resided within the lung remain important unanswered questions.

Cystic fibrosis (CF) is a genetic mutation that results in defects in chloride transport across the lung epithelium, the consequence of which is a dehydrated mucus that is harder to clear. The immune system is still intact and can ward off systemic infection, but the infections of the lung persist longer in CF patients. One of the most common CF lung infections is Pseudomonas aeruginosa infection, which about 50% of CF patients experience. Pseudomonas is so common in part because of its cosmopolitan nature; because it’s found all over, many patients are exposed and present the opportunity for Pseudomonas to colonize.

Do different microbial species physically interact during a lung coinfection? This is really hard to determine, but in as small a sample as 10 µl, multiple species can be present. Deb’s research team is now focusing on the transcriptional profiles, which can be determined to be due to specific microbial interactions. In this way, the transcriptional responses of the microbes can act as a sentinel for when those interactions have occurred within the lung.

The filamentous form of Candida is colonized by many types of bacteria, including Pseudomonas species. The fact that Candida yeast cells aren’t colonized by these bacteria suggests a possible evolutionary advantage of the yeast morphology in these interkingdom interactions.

Deb’s team had the opportunity to work with CF lung infection samples from patients with Pseudomonas aeruginosa and Candida lusitaniae co-infections. Candida lusitaniae is rare in CF lung infections, and isolate characterization studies revealed that the Candida lusitaniae population had diversified into several lineages. Genome sequence analyses revealed several mutations in a transporter gene, and many of these mutations conferred resistance to the antifungal drug fluconazole, despite no fluconazole administration in the patient history. Additional experiments revealed that a Pseudomonas secreted product, phenazine, was less able to kill Candida lusitaniae lineages that carried these transporter mutations—thus the co-infection selected for drug resistance, even in the absence of any drug exposure.

“One of the similarities of the lung to the gastrointestinal tract is that there’s this continuous cycle: first the creation of mucus, then clearance of mucus, then regeneration of mucus. It’s a really dynamic environment; the microbes there are constantly recolonizing new niches.”

“I try not to get too hung up on the idea of ‘signaling’ and think more whether or not a molecule is affecting the behavior or some other important characteristic of the microorganism that experiences it.”

“I’m excited about all the ‘omics technologies that we have available now, which I think are going to help us put together the effects of multiple factors, everything from a change in pH to a small molecule that has a receptor, and look at the consequences of all those interactions at one time.”

“These [interspecies microbial] interactions, as you imagine, are pretty complex. Often when we do RNA seq analysis of 2 organisms together, we can find hundreds or even thousands of genes that are changing. By using machine learning approaches and large data compendia, we can simplify that into discrete pathways much more easily than we could before.”

“We’re hoping that this kind of [NanoString RNA] approach will help to monitor infections in a more quantitative way. By monitoring RNA directly, we think we can get a really good handle on whether a population is declining, or staying the same, or increasing, or if the dominant pathogen might be changing as the antibiotics work to knock out one but not another. We’re very much interested in developing this as a strategy that might be useful in the clinic.” 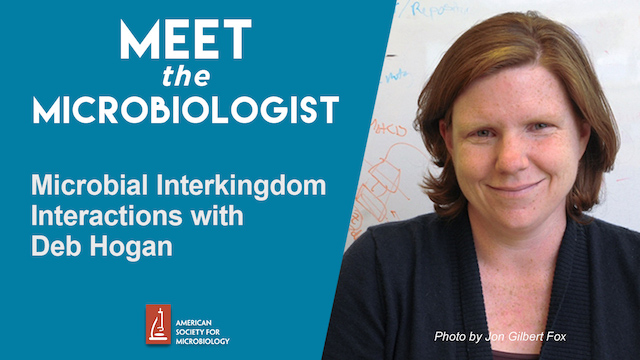 
I started going down the rabbit hole of model organisms, inspired by Deb’s use of Candida as a model eukaryote. I started by googling the question: what is the strangest model organism? The answer, according to my browser history and the algorithm that Google thinks will provide me with my top answer, is Drosophila - a relatively mundane model organism, when one considers the fruit fly. I’ve got several wild type Drosophila making themselves comfortable in the studio right now, so they don’t seem like an unusual choice to me at all.

A model organism is a non-human species that is studied to understand particular biological phenomena, such as disease pathogenesis but also development, metabolism, and other non-microbial processes, and the expectation is that discoveries made in the model organism will provide insight into the workings of other organisms. However, the selection of an organism as a model organism is often due to history: why do we use the models that we do? Why is E. coli the model Gram-negative bacterium, for example? I think the answer to this is mostly luck: enough scientists started studying the easily culturable bacterium, and as the tool set grew and more plasmids and various molecular modification methods were discovered, these encouraged additional scientists to use E. coli. Success breeds success, so to speak - or E. coli breeds success, in this case.

But what about the places that scientists receive their model organisms from? These repositories are hugely important to scientists, because they hold thousands, probably hundreds of thousands of species - microbial and non-microbial depending on the repository. Microbial collections started almost as soon as pure microbial culturing techniques were developed, and the first microbial collection consisted of some of bacterial isolates collected by Frantisek Kral at the German University of Prague. These were collected into the first catalog of bacteria which was published in 1900. Other countries and institutions were starting their own culture collections as well: The Mycothèque de l'Université Catholique de Louvain, now also known as the Belgian Coordinated Collection of Microorganisms, was established in 1894, and the Collection of the Centraalbureau voor Schimmelcultures (CBS) was founded in the Netherlands in 1906.

Around this same time, scientists in the United States were also forming a culture repository. One of the members of the Society for American Bacteriologists, Charles-Edward Amory Winslow, suggested the formation of a “museum of living bacteria for the benefit of working laboratories all over the world.” Winslow worked at the Museum of Natural History in New York City, which may be what inspired him for a bacterial museum, so to speak. The American Type Culture Collection, what many know simply as ATCC, was founded as a private nonprofit in 1899, with strain donations from scientists around the world. Many other repositories donated strains, including many of the Kral collection, and in fact the practice of culture collections sharing strains freely is one that continues through today. In 1913, the ATCC published its first catalog, with isolate names such as Bacillus subtilis, which should sound familiar, but also “Bacillus of Canned Clams” and “Bacillus of Ropy Milk,” with the exact genus and species of these isolates not determined at the time of donation.

The ATCC passed hands between responsible organizations and sponsors many times over the course of decades, with its collection waning and waxing with funding, and was on the brink of bankruptcy more than once. Fortunately, someone or some institution always intervened to give the collection a new physical home or to provide the infrastructure that maintaining microbial cultures requires. Nevertheless, studies with contaminated samples threatened to close the facility in the late 1950s. Around that time, the NIH and NSF both provided funds for the first real physical home of the collection based in Maryland, where the collection exists today.