END_OF_DOCUMENT_TOKEN_TO_BE_REPLACED

Does the fetus have a microbiome? How does the placenta prevent infection? Carolyn Coyne talks about placental structure and biology, and why studying the maternal-fetal interface remains a critical area of research.

The placenta forms within 3-5 days post conception as a single layer of cells surrounding the fertilized embryo. These cells differentiate and develop into more complex structures.

Very few microbes cause fetal disease. Of those that do, the disease-causing microorganisms are diverse and can lead to serious congenital defects or even death of a developing fetus. These microbes are largely grouped into the TORCH (now TORCH-Z) microorganisms:

In the later stages of development, the placenta is coated in a layer of fused cells, leading to a shared cytoplasm that covers the entire surface area of the placenta. This fused-cell layer is formed from syncytiotrophoblasts, and the fusion is facilitated by the activity of an endogenous retrovirus fusion protein.

“Maternal and fetal blood never mix during pregnancy; the placenta really is the main barrier, conduit, transport system [between the two.]”

“When you think about pregnancy I think one of the misconceptions is that the placenta is one structure that’s always there and that it never changes. Really, it’s very, very dynamic from within days after conception until birth, the placenta is changing in a variety of different ways.”

“The placenta is remarkably immunologically active. It is secreting constitutively things which to any immunologist (which I am not) would be very surprising: highly inflammatory cytokines, interferons, things that from the basics of what we know from immunology, you would say to yourself, ‘that doesn’t make any sense.’ This is when the rules of pregnancy become very complicated. One thing that makes the immunology of the maternal-fetal interface so unique is you have a fetal derived placenta within the maternal host. Genetically and immunologically, you really have to think about the fact that part of pregnancy is skewed such that the immune system doesn’t reject or attack the fetus, because it is obviously a parasite. This idea of immunology at that interface is why I think the rules are completely different; we’re in a setting that doesn’t usually exist in natural immunology or human biology.”

“Often times, these trophoblasts are described as epithelial-like, and they certainly share properties so that’s absolutely true, but I consider them much more like an immune cell...trophoblasts take the most important aspects of an epithelial cell type and an immunological cell type and combine them to make this really unique cell that only exists during pregnancy.”

“If I give a seminar about the placenta to a microbiology department, I am usually asked this question, if not at the end of the seminar then in the closed-doors of someone’s office. What I say is always the same: first, I don’t have a dog in this fight. Second,I think from the classic definition of a microbiome, the way we think of the microbiome in the gut or in the vaginal tract, I do not think the placenta has a microbiome.”

“The most common misconception about the placenta is that it’s a maternal tissue. It’s not; it’s genetically matched to the fetus.” 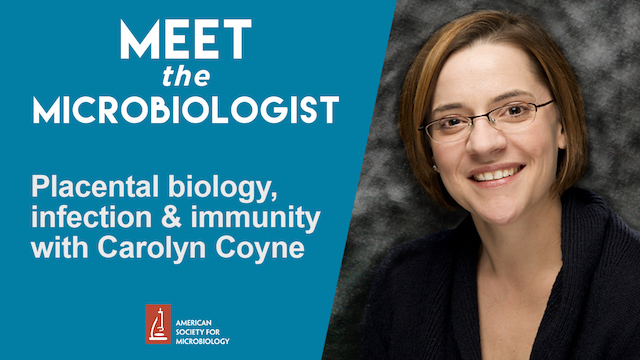 The story I want to highlight is of Margaret Dayhoff, the founder of bioinformatics.

You didn’t know a woman was behind the enormously influential and important field of bioinformatics? Neither did I, and neither did Jamie Henzy, who authored this chapter, in the book Women in Microbiology. In her introduction, Henzy writes:

“Like many researchers, I first became aware of the Dayhoff name as it is referenced in programs that generate multiple sequence alignments. “Dayhoff, M.O.” is associated with the point accepted mutation (PAM) amino acid substitution matrix she developed, one fo the options we’re given for making sure the amino acid changes shown in our alignments are the ones most likely to have actually occurred during the seqeunces’ evolution. I admit that I assumed she was a man, since the field of bioinformatics, being a  subfield of computer science, has a male, geeky sheen to it. I was not the only one to assume wrongly, as evidenced by a post I found on an online forum on biology. Turbulence Acid (username changed to protect the guilty) says, “Dayhoff is a famous sequence analysis guy who I cite in my lectures” (emphasis added). This remark was made in 2002. Hopefully Turbulence Acid has since corrected his error.”

Margaret Belle Oakley was born in Philadelphia, Pennsylvania in 1925, a time when few men or women considered computing careers. She graduated from New York University in 1945 with a bachelor’s degree in mathematics and subsequently earned her master’s in chemistry, after which she went to Columbia University to work in quantum chemistry. It was there at Columbia University that she became a fellow at the Watson IBM Laboratory, which was set up to provide computer resources for the military (after all, World War II had just ended). Margaret was granted her Ph.D. in 1945 - only 3 years after her bachelor’s degree! Boy, how times have changed.

Fast forward to 1960. DNA structure had been discovered, but sequencing technologies had not. Frederick Sanger, who would eventually develop Sanger DNA sequencing, had created a protein sequencing method that involved degrading many copies of the protein under study, sequencing these overlapping fragments, and assembling them into the correct order. Margaret, married name now Margaret Dayhoff, developed FORTRAN programs to assemble the peptide sequences in as quickly as 5 minutes, a huge improvement from the previously labor-intensive task.

Other labs began to use this protein-sequencing technique, and homology between similar proteins related by ancestry began to reveal itself. In 1965, Dayhoff published The Atlas of Protein Seqeunce and Structure, an analysis of the 70 published protein sequences. From her analyses, point-accepted-mutation matrices were developed, as well as the first computed phylogenetic trees.

Margaret Dayhoff faced a number of hurdles in her scientific career: of course, there are the obvious challenges of being a woman in a very man-dominated field, but her dry-lab analyses were considered inferior by wet-lab researchers. When applying for membership to the American Society of Biological Chemists, a board member responded “Personally, I believe that you are the kind of person who should become a member of the [society.] However, the candidate must demonstrate that he or she has done research which is clearly his own. The compilation of the Atlas scarcely fits into this pattern.” Can you imagine if that attitude had prevailed through to today, how this would have affected growth in the bioinformatics field?

You may be familiar with Jamie Henzy if you read Small Things Considered, a blog run by Elio Schaechter and Roberto Kolter. Jamie Henzy has contributed a number of great blog posts throughout the years, including one about syncytiotrophoblasts and the role of endogenous retroviruses.

One of the most fascinating snippets that Carolyn mentioned at the end of our discussion was the fact that the retrovirus proteins used by different mammalian species are different, implying that a retrovirus with this cell-fusing power must have infected different species independently during the evolution of mammals. A piece titled “Retroviruses, the Placenta, and the Genomic Junk Drawer” by Jamie Henzy discusses this convergent evolution and the effects of different retrovirus syncytin proteins on placental structure. Biology is so amazing!