END_OF_DOCUMENT_TOKEN_TO_BE_REPLACED

Marshall Bloom talks about biosafety, his research on Powassan virus, and some history of the Rocky Mountain Labs.

How does tick biology influence their ability to transmit disease? Marshall Bloom explains the role of the tick salivary glands in Powassan virus transmission and the experiments that led to this discovery. He also provides a historical background for the Rocky Mountain Labs in Hamilton, Montana, and talks about the 3 elements to consider when working with potentially harmful biological agents.

You need 4 bites of an APPLE for full lab safety, for work in labs from high school level through biosafety level 4: Most of the vector-borne flaviviruses, including Powassan virus, don't cause overt disease in the people they infect, so many people never know they've been infected. Without serological surveys, it's difficult to know the full range of infected individuals versus those that develop serious disease. Serious disease often manifests in neurological symptoms such as encephalitis, with 10-15% mortality rate; half of those suffering neurological disease will continue to have serious sequelae for years.

The Rocky Mountain Labs was once the world reference center for ticks: it held thousands of samples which represented the type species for the entire world.

The tick salivary glands look like a bunch of grapes: the stem of the grapes is a series of branching ducts. The "grapes" at the end of the ducts are the acini, which is Latin for ‘little sac.' These acini play a major role in tick feeding, and different types of acini play different functional roles:

"The first isolation of Powassan virus was from a little boy in Powassan, Canada in 1958. If you look at the cases over the years, the numbers are going up, but compared to Lyme disease, they're pretty low: there's been less than 200 cases, all told."

"Amazingly, the Powassan virus can be transmitted in as little as 15 minutes….[and] a female tick can take days to get a full meal."

"I take a tick-centric view. If I can anthropomorphize, as my old friend Stanley Falkow used to say, he'd say ‘think like the microbe.' The microbe doesn't really care if we get sick or not. The microbe is just trying to make a living and survive."

"One of the really surprising things is that infected ticks can infect uninfected ticks, if they are feeding right next to each other. Ticks like to feed in groups: it's called co-feeding. The virus can transferred really quickly, 15 min, which is way faster than the virus can go through a replication cycle. What that means to me is that the ticks are infecting each other….we want to investigate the role of co-feeding." 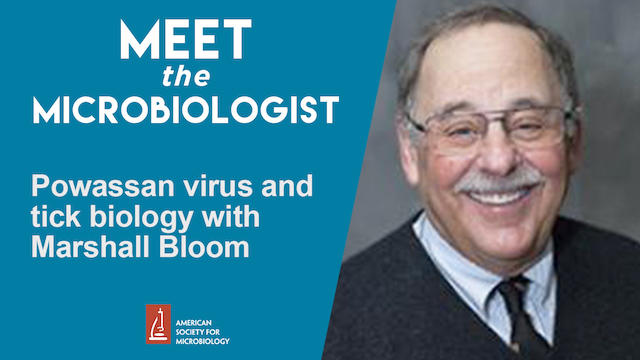 
With summer around the corner and everyone ready to safely go outside, it's important we protect ourselves from covid by using proper social distancing and ppe like masks, but it's also important to prevent mosquito and tick bites. Use DEET or another insect repellent when going outdoors, especially when hiking or walking through tall grasses, and always check yourself for ticks afterward, remembering that the nymph stage can be extremely small!

One solution suggested to eliminate arthropod-borne diseases is to eliminate the arthropods themselves. There are attempts to do this right now, as we spoke about with Seth Bordenstein, regarding mosquito sterilization techniques. There are several mosquito birth control methods, including release of males that have an incompatible strain of the endosymbiont bacterium, Wolbachia. This can also be done genetically, as Oxitec is doing in its field trials. The Oxitec mosquitoes are raised on tetracycline-doped feed, which represses a transcriptional activator — when released, the activator becomes active and causes genetic havoc in the organism, leading to death before reaching sexual maturity. This very sophisticated system is much different than a different insect eradication method, one that was successfully carried out in the United States decades ago.

Cochliomyia hominivorax, more commonly called the screwworm, was a problem in midcentury United States. The screwworm lays its eggs and spends its larval stage in the muscle of warm-blooded animals, and while the flying adult is most attracted to open wounds, it can also penetrate the skin to lay eggs inside, which hatch into larvae that burrow deeper into the necrotic tissue. The flies don't carry specific pathogens, but can cause great harm, especially to livestock that may have open wounds due to dehorning, branding, flea bites, etc. To eliminate the screwworm, scientists Edward Knipling and Raymond Bushland devised the sterile insect technique.

The sterile insect technique involves release of many sterile males into the wild, where the sterile males would effectively titrate out the fertile males, increasing the chances that the females would mate with one of the sterile males. The fascinating aspect from a modern era is the means of sterilization: the two scientists determined that x-rays were the simplest and most cost-effective way to steriles screwworm pupae without affecting development into adults.

Field trials were held on the Florida island of Sanobel and the Dutch island of Curacao, where airplanes dropped 1000 sterile flies per square mile each week. By the end of 9 weeks, which is 3 reproductive generations of the flies, all egg cases were found to be sterile, showing how effective the sterile insect technique could be.

In the 1960s, the U.S. Department of Agriculture and the Mexican Secretary of Agriculture and Livestock decided on a collaborative effort to drive down the screwworm population. The flies had been found from about the midpoint of the United States — if you drew a line from Washington, D.C. to around San Francisco, California, all the land south of that would be endemic for screwworm. The program began in August 1972, and as of 1991, the population was undetectable in the U.S., Mexico, and parts of Central America.

Since learning about this program, I've learned of other instances of sterile insect technique programs, including those to eliminate the Mediterranean fruit fly, the Aedes mosquitoes from Oxitec, and the Aedes mosquitos carrying incompatible Wolbachia bacteria. Does our ability to more finely tune insect genomes bode for more successful sterile insect programs? Which do you think will cause smaller ecological footprints?

Marshall Bloom talks about biosafety, his research on Powassan virus, and some history of the Rocky Mountain Labs.