END_OF_DOCUMENT_TOKEN_TO_BE_REPLACED

Jason Bartz discusses his research on prions, stable misfolded protein conformations that cause spongiform encephalopathies in a variety of mammalian species.

Can a protein be contagious? Jason Bartz discusses his work on prion proteins, which cause spongiform encephalopathy and can be transmitted by ingestion or inhalation among some animals. He further discusses how prions can exist as different strains, and what techniques may help improve diagnosis of subclinical infections.

Prion protein is a normal protein in the central nervous system but the function of the native protein is still unknown. It is dispensable in mice; knockout mice lacking the gene develop normally. However, prion protein is very conserved between mammalian species.

Prions PrPsc can accumulate in many different cell types in the body but is only toxic to neurons, which is why disease manifests in the brain. However, prions can amplify in other parts of the body like the spleen and lymph nodes.  For the life of the host, there will be high levels of infectivity in these peripheral structures.

There are 3 major ways that prion diseases can be transmitted: Some prion diseases are very contagious; for example, a herd of goats or sheep infected with scrapie will have 40-50% of its population test positive for the disease. How is the disease transmitted between herd members? Scientists hypothesize the prion can be inhaled or ingested to facilitate animal-to-animal transmission.

Prion strains are operationally defined as a phenotype of disease under a fixed set of agent and host parameters, and this set of parameters is heritable. The current hypothesis is that there are strain-specific conformations of PrPsc.

Chronic wasting disease in free-ranging animals such as deer is a danger for a number of reasons. Scientists don’t fully understand interspecies transmission of prion diseases, and the prions in infected herds may be transmitted to people who hunt deer or livestock that co-range with the infected deer populations.

“The difficulty for treatment of prion diseases is that for these treatments to really be effective, in experimental settings, treatment has to start with the onset of infection or very soon afterward. In a human setting, by the time someone develops clinical symptoms, amplification of prions has been ongoing in that host for decades and these treatments are really ineffective. This is where new diagnostic techniques will become super useful; they will give us the opportunity to identify individuals who are harboring prions and a larger window for therapeutic treatments to work.”

“I don’t usually use the word latency [about the subclinical phase of prion disease] because when I think about viral latency, I think about something the virus does actively to suppress its own amplification. Prions don’t do that; they’re just really slow.”

“One of the potential difficulties in controlling prion diseases in deer and sheep is the long-term persistence of prions in the environment.”

“It was only in 2007 that prions were, in my opinion, really formally proven as the infectious agent. To a certain extent we’ve only known what prions are for about 12 years. This is really a brand-new field and we’re trying to identify how this protein-only agent performs all these complicated biological functions.”

“Get a bunch of smart people in the same room with different training and in my experience, you come up with solutions to problems you never would have on your own.” 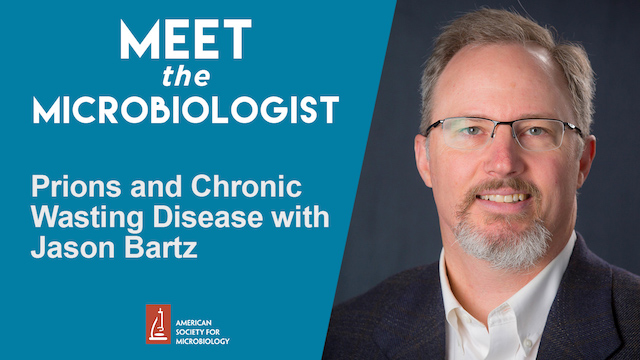 
I want to highlight a piece of history not that far back in history itself. The mad cow disease epidemic was covered by tons of media and grabbed lots of headlines during the height of the epidemic in the 1990s, which led many governments to ban the import of British beef and beef products. Case incidence was largely waning among cattle herds by the mid-aughts, but that was when the Food and Drug Administration banned another import — of donor sperm. Their rationale was that there existed an immeasurable risk for mad cow disease transmission, given all the unknown variables in transmissible spongiform encephalopathies. And the ban wasn’t solely on British sperm donations — all imports of European donor sperm were prohibited, and remain so to this day.

This ban wasn’t made without reason, however. Just a decade prior, during the height of the AIDS epidemic, several women who had been artificially inseminated became infected with human immunodeficiency virus through their donor samples. In a 1995 retrospective study, 7 of nearly 200 women who had been inseminated from 1 of 5 identified HIV-infected donors had become seropositive for HIV. Earlier, in 1990, scientists had tried to artificially inseminate a woman using sperm from her husband, who was HIV positive; the sperm was washed several times to avoid HIV transmission, and yet still the woman became HIV infected through the procedure. Recent reports of Zika and dengue viruses being transmitted sexually suggest there’s a lot yet unknown about which diseases can be transmitted sexually, how that occurs, and what we can do to stop transmission.

Scientists have however since devised the ability to clean sperm samples from contaminating HIV. Even in 1990, the research team admitted that they couldn’t be certain that transmission had occurred through the artificial insemination process, since the couple was still sexually active. Antiretroviral drugs are now better able to suppress viral titers in the patient, which help to decrease transmission, and this combined with better washing techniques has helped to severely decrease HIV transmission through sperm donation and artificial insemination. A 2017 retrospective study found that in nearly 4000 women who underwent nearly 12,000 rounds of artificial insemination, no HIV transmission occurred, even in the subset of HIV-infected men who didn’t have undetectable viral loads at the time of sperm donation.

Maybe influenced by these findings, the CDC in 2017 endorsed sperm washing as a way the HIV-discordant couples could safely conceive a child. Before this, the CDC had endorsed conception only when both parties used antiretroviral drugs to prevent viral transmission, though other medical associations had endorsed sperm washing. Sperm washing techniques now involve not only washing away seminal fluid, but also separating sperm from lymphocytes, which can serve as a reservoir for HIV in semen.

All of this preceded the most recent history tidbit yet. A little over a year ago, He Jiankui announced the birth of two babies who had had their DNA modified via CRISPR — the first germline-edited genetically modified humans. The babies had been edited in their CCR5 gene, which is a coreceptor for HIV infection of white blood cells. The rationale for editing their genomes was that the parents are an HIV-discordant couple: the father has HIV and the mother doesn’t. Modifying the CCR5 gene, according to He, would allow the parents to safely give birth to healthy children.

There are many ethical abominations surrounding this case, from how prospective parents were recruited for participation to the creation of new CCR5 alleles never detected in people before and the unknown ramifications of these. One of the foundational problems, in this scientist’s opinion, is that He was solving a problem that didn’t exist: HIV-infected parents have been safely having HIV-uninfected children for many years, thanks to decades of research into safe sperm washing.

Back to the U.S. ban on imported European sperm. When the ban was instituted in 2007, scientists on both sides of the Atlantic commented that it was relatively needless, and that other diseases, such as genetic diseases, should be of more concern than a negligible chance of catching mad cow disease from a sperm donor. Nevertheless, the ban still stands, and has completely changed the economics of the sperm bank system — and it was this economics story, which I heard on a recent Planet Money podcast episode, that inspired me to look into the history of disease transmission through sperm donation.

Jason Bartz discusses his research on prions, stable misfolded protein conformations that cause spongiform encephalopathies in a variety of mammalian species.