Meet the Microbiologist SAR11 and Other Marine Microbes with Steve Giovannoni

END_OF_DOCUMENT_TOKEN_TO_BE_REPLACED

Steve Giovannoni describes his work on SAR11, including what its nutrient requirements teach us about seawater and how its metabolic strategy is analogous to a house with the lights always on.

The most abundant organism on Earth lives in its seas: the marine bacterium SAR11. Steve Giovannoni describes how the origins of SAR11 provided its name, and the ways that studying SAR11 have taught scientists about ocean ecology. He also discusses how the different depths of the ocean vary in their microbial compositions and what his big questions are in marine microbiology.

Different depths of the ocean have different habitats, but the microbes vary continuously, based in part on light availability: SAR11 is small in both physical size and genome size (0.37–0.89 µm and 1.3 million base pairs, respectively). It is nevertheless the most abundant organism on the planet, with more than 1028 cells estimated to exist worldwide. These cells convert between 6-37% of the carbon fixed in the oceans daily. SAR11 in different niches have ecotypes with different specialties but look physically similar and have very similar genome sequences.

Naturally, the most abundant cells in the ocean have the most abundant parasites: bacteriophages called pelagiphages infect SAR11 all over the world. SAR11 and pelagiphages are under constant evolution, though there doesn’t seem to be a CRISPR system in the Pelagibacter genome; these bacteria largely use other mechanisms to evade phage infection.

SAR11 is like a house with the lights on all the time, in that the cells constitutively express most metabolic genes. For example, SAR11 metabolizes dimethylsulfoniopropionate (DMSP) into dimethyl sulfide (DMS) and methanethiol (MeSH), which can be produced as soon as the cells are exposed to DMSP. While this may seem energetically expensive, the cells must capitalize on their encounters with this transient resource, often found only at low concentrations, and this capitalization requires the investment of protein production. The cost of metabolic gene regulation outweighs the benefits in this particular case.

SAR11 and SAR202 are the poles on the spectrum of heterotrophic marine bacteria. SAR11 is very efficient at accessing and using the organic compounds that come from the phytoplankton (also called the labile organic matter). SAR202, found in the deeper part of the ocean, specializes in hard-to-access carbon compounds that other bacteria can’t access.

“The difference between the photic zone (the region where there’s light) and the dark part of the ocean is that in the photic zone, the nutrients are all gone: there’s plenty of power but there’s not enough nitrogen, phosphorus and, often, not enough iron. In the deep ocean, there’s plenty of nitrogen, phosphorus and iron, but the only source of power is only those things—dead cells and organic compounds—that are raining down from the surface.”

“In a global sense, what’s happening in the ocean that makes it so different from what’s happening on land is that most of the carbon that’s being fixed every single day is being turned back into carbon dioxide by heterotrophic cells. How is that different from what happens on land? On land, there are trees; there are large plants. In the ocean, there are really teeny single cells, and they turn over at a really high rate. The carbon cycle in the oceans is very different from the carbon cycle on land because of that very rapid turnover, which is almost all microbial.”

“It’s called SAR11 because it was the eleventh clone from the Sargasso Sea that we sequenced when we began to sequence DNA out of the oceans.”

“If you go the ocean, and you go for a swim, and you accidentally swallow a mouthful of seawater, you’ve probably swallowed a million SAR11 cells.”

“In every age, at every stage, a lot of people think ‘well, most of the good stuff has been discovered.’ I was lucky that I and my students got to discover SAR11. But I can assure all the young scientists out there that there are many, many important things left to be discovered.” 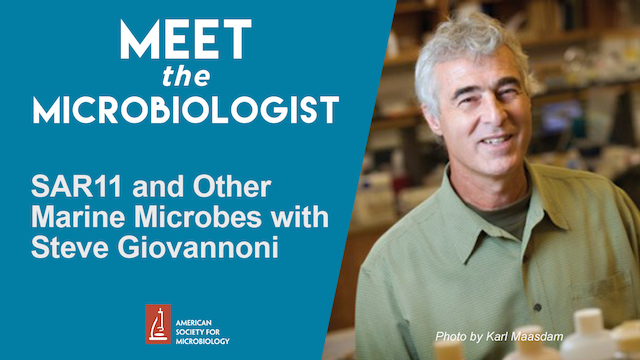 
Lynn Margulis proposed that organelles, specifically the mitochondria, plastids, and basal bodies, had evolved from independently free-living cells. What evidence supports this? Well, consider the mitochondria, an organelle that I often joke has the best PR of all organelles: everyone who takes high school biology can tell you that mitochondria are the powerhouse of the cell. This idea, that one single-celled organism had taken up residence inside another to generate cell organelles, wasn’t completely Margulis’, you may be surprised to learn - I certainly was. Konstatin Mereschkowski first wrote “The Theory of Two Plasms as the Basis of Symbiogenesis, a New Study of the Origins of Organisms” in 1910, but science hadn’t developed enough data nor methods to test Mereschkowski’s ideas at that time. The idea was proposed again by Ivan Wallin in 1922, when he started publishing a series of papers titled “on the nature of mitochondria.” By the time Margulis published her piece, “On the Origin of Mitosing Cells,” in 1967, molecular and structural evidence lent greater support to her proposal, such as the presence of mitochondrial DNA, which was discovered in the 1960s using both electron microscopy and biochemical methods.

I found a freely available copy online of “On the Origin of Mitosing Cells,” published in the Journal of Theoretical Biology (linked above). Side note: the name under which this article was published was Lynn Sagan, as Margulis was married to Carl Sagan through her graduate studies and kept his name until remarrying crystallographer Nicholas Margulis. I was particularly pleased to cover this topic because learning about the endosymbiotic theory was one of those moments in my formative years that biology really clicked for me in an evolutionary sense.

Lynn Margulis had a notable career as an out-of-the-box thinker; finding evidence to promote the endosymbiotic theory is one example of that. It’s also clear from hearing her speak, which you can do on YouTube, that she valued her identity as a scientific outsider, someone who wasn’t afraid to challenge the establishment. Creative thinking is great for science, when evidence can support it. Unfortunately, Margulis’ activities toward the end of her life were contrarian without the scientific data to back her ideas. This was evident in her attitude of symbiosis: while it is clearly an important force within evolutionary history, it is not THE evolutionary force, and Margulis often felt symbiogenesis (the combination of 2 species) wasn’t given its proper due in natural history texts, juxtaposing herself against those she called neo-Darwinists. This was especially true in her outspoken questioning of HIV as the causative agent of AIDS, or whether HIV even existed as a virus at all; she attributed AIDS to syphilis. Largely because of her earlier scientific contributions, these ideas were given a platform in mainstream media outlets, where again, her status helped to spread them.

Margulis died in 2011, but having lived throughout the modern media era, much of her writings and speakings have been captured and can be found online (linked above).

Steve Giovannoni describes his work on SAR11, including what its nutrient requirements teach us about seawater and how its metabolic strategy is analogous to a house with the lights always on.