END_OF_DOCUMENT_TOKEN_TO_BE_REPLACED

Rita Colwell describes some of her great discoveries in Vibrio cholerae, including evidence for its environmental niche and modeling to predict cholera outbreaks.

Rita Colwell has made major advances in basic and applied microbiology, largely focused on Vibrio cholerae. She describes several lines of evidence for the environmental niche of the bacterium, as well as her work to predict and prepare for cholera outbreaks. Colwell closes with her thoughts on why it's a great time to be a microbiologist.

Different Vibrio populations can share genetic programs that affect the serotype and bacteriophage can transfer the genes for the toxins. Colwell speculates that this widespread lateral gene transfer has affected efforts at developing an effective cholera vaccine.

Colwell and her colleagues realized that Vibrio outbreaks can be predicted when first observing that phytoplankton (including copepod) increases correlate with cholera case increases, later demonstrating a relationship between phytoplankton, chlorophyll, and water temperature and salinity. In the 1980s, the LANDSAT satellite program was launched and could measure chlorophyll, which Colwell and collaborators were able to use to predict cholera outbreaks. Since then, models have improved so that multiple international groups now work together to predict future outbreaks and prepare affected areas with physicians and health supplies.

Colwell is co-founder of CosmosID, a microbial sequencing and bioinformatics company. She was motivated to found the company by 2 major professional experiences:

Colwell believes there is no such thing as a pure culture, that no 2 cells of a bacterial population have the exact same genetic makeup. She likens members of any bacterial community to a soccer team, working together to fill different roles and working against others when they fight for nutrients and space.

"The interesting thing about the viable-but-nonculturable state is that the host of Vibrio cholerae is a copepod...and in the winter months, the host copepod buries into the sediment and undergoes diapause. If Vibrio cholerae has as its natural host the copepod, then in effect the Vibrio cholerae goes into diapause with its host."

"I asked the question early on: doesn't this have to be an environmental bacterium? Why would a human pathogen be chitinolytic and luminescent? I also think (this is an hypothesis) that the toxin plays a role in osmoregulation, though I haven't been able to prove it."

"Vibrio cholerae and other Vibrio are globally distributed. All the continents and all the coastal areas are susceptible to outbreaks, and in fact in 1800, in 1900, we [in America] had outbreaks of cholera. At the Monocacy Aqueduct of the Chesepeake and Ohio Canal, where I like to hike and jog, embedded in the bridge is a concrete slab with a memorial that says ‘dedicated to the canal workers who died of cholera.'"

The computer I used for my PhD thesis was the IBM 650. I had to program it in machine language, and I had to run the computer between midnight at 6am, when grad students got to use it, in the chemistry lab where the computer was located at the University of Washington. Of course, now everything is automated to the point that we can do any analyses on a laptop."

"I think it's a wonderful time to be a microbiologist!" 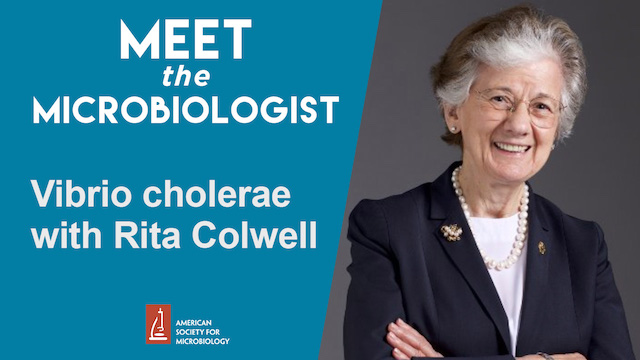 
There are many pandemics with bacterial etiologies, but the one that springs to the top of my mind is cholera, for many reasons. Cholera continues to kill tens of thousands of people each year, with outbreaks emerging in different areas of the world based on many factors, including those discussed in our interview. And because of its long history with humankind, cholera epidemics have been central figures in stories through the ages, from Thomas Mann's Death in Venice to Gabrel Garcia Marquez' Love in the Time of Cholera. Unlike tuberculosis, which was often romanticized, cholera was associated with unclean spaces and often with lower economic classes.

I was first introduced to cholera in the book The Secret Garden by Frances Hodgson Burnett. Did you read this book as a kid? We read the book in elementary school, and watched the movie too. I didn't note much about cholera, other than that it leaves the main character an orphan at the beginning of the story. In the movie (I think I watched the 1987 made-for-tv version; there have been several made, including one in 2020), in the movie that I watched, cholera is a very striking disease - I recall people falling down dead at the dinner table. Given what we know about the rice water diarrhea caused by this bacterium, it's unlikely patients would be struck down so suddenly, but I imagine this was the creative license afforded to TV producers in the 1980s.

Curious about cholera's portrayal in the book, I found a wonderful website that will be today's feature for the History of Microbiology tidbit: Epidemics in Children's Literature, a site maintained by Katherine Stein, then a university student at Marquette University. Stein collected several excerpts of children's classic literature, such as The Velveteen Rabbit, and the references to the diseases discussed in each. It's a fun site that provides the relevant passages about ongoing epidemics and serves as a trip down memory lane if you happened to read these books as a young child. Of course, to most young children, any disease or pandemic or illness can be difficult to differentiate, and rereading these passages for the first time in decades shed a different light on the disease to my adult self.

If you don't know the story, Mary Lennox's parents are colonialists in British India, when they succumb to a cholera outbreak in the first few pages. This leads Mary to be sent to England, where most of the story takes place. Here I'll read from Stein's work on The Secret Garden, which contains a passage from the book:

In Burnett's novel, the cholera sweeps through Mary's life in a way that is very stereotypical of public understanding of epidemics: one person gets sick, the disease rapidly spreads, and, before one can fully understand what is happening, an entire population is decimated.  Indeed, in the specific context of the novel's plot, Mary's Ayah falls sick, panic spreads, Mary's Ayah dies, and then, amidst mass hysteria, everyone else (save for Mary) in the surrounding bungalows fall ill and die.

The cholera had broken out in its most fatal form and people were dying like flies.  The Ayah had been taken ill in the night, and it was because she had just died that the servants had wailed in the huts.  Before the next day three other servants were dead and others had run away in terror.  There was panic on every side, and dying people in all the bungalows.

During the confusion and bewilderment of the second day Mary hid herself in the nursery and was forgotten by everyone… She only knew that people were ill and that she heard mysterious and frightening sounds.

Stein goes on to describe an 1883 cholera outbreak in India that may have formed the basis for Burnett's 1911 novel. Of course, the bulk of the novel is unrelated to cholera, but the disease is what sets the story in motion at the beginning.

If you haven't visited children's literature where disease is prominently featured, I recommend you spend a few minutes reading Epidemics in Children's Literature. It brings a microbiological eye to women-authored children's literature like The Secret Garden, Little Women, and A Little Princess. There will likely be future additions to this canon where COVID-19 is part of the narrative tapestry, too. Now over a year into the global pandemic, the ways that COVID has changed our lives is likely to be the background of future pieces of culture. There are already books and shows geared toward both kids and adults where covid is one of the main characters.

I'll also briefly note that Hazel Barton is one of the editors of the wonderful Women in Microbiology book, a collection of microbiological contributions by amazing women microbiologists.

Rita Colwell describes some of her great discoveries in Vibrio cholerae, including evidence for its environmental niche and modeling to predict cholera outbreaks.