END_OF_DOCUMENT_TOKEN_TO_BE_REPLACED

The urban water cycle and its importance in eliminating waterborne pathogens.

Marylynn Yates discusses the urban water cycle and its importance in eliminating waterborne pathogens. She describes the types of microbes that can survive in water and how testing for different microbial types can affect interpretation of contamination levels.

Worldwide, water is a large source of infectious disease. Billions of people have no access to safe water and this culminates in 1.5 billion cases of diarrhea and 1.5 million deaths from contaminated water annually.

The urban water cycle takes water from lakes or the ground for its first treatment before delivery to our homes. Water leaving our homes as waste water goes to a second facility where water is given a different set of treatments to eliminate disease-causing microbes before the water is returned to lakes or rivers. Different treatment facilities are needed because the concentration of contaminants is different in water before and after use in our homes.

Crystal clear spring water can be deceiving, but can carry disease-causing microbes. Animals can carry protozoans such as Giardia and Cryptosporidium, which also cause disease in people. This is why treating water, even with a simple boiling procedure, is important when backpacking or camping.

Bacterial sentinels such as Escherichia coli can be used to measure potential bacterial pathogen presence, but they don’t measure pathogenic protozoans or viruses. This is in part because the treatment necessary to eliminate bacteria is different than that necessary to eliminate protozoans and viruses. Some scientists argue that bacteriophage are a better measure of potential pathogenic virus present, though no regulations require phage monitoring. Others argue that detection of a spore-forming bacteria, such as Clostridium perfringens, would better predict protozoan presence.

“Because there is no new water on Earth, we need to make sure that after we use water that we treat it in a way so that when it’s used again as drinking water, it’s as clean as it can possibly be.”

“Some viruses are very hardy and can survive for a long time (outside their host cell). They don’t need nutrients like bacteria do, so they just sit there - almost like a chemical contaminant.”

“Some of these viruses, such as hepatitis A virus or norovirus, can survive for a long time in the environment. When I say ‘quite a long time’, I mean for weeks or months, or in the case of hepatitis A, there was one report that it lasted up to a couple of years.”

“It’s that real-world application that has kept me going for all these years, knowing that I can have an impact on public health in my own, tiny way.” 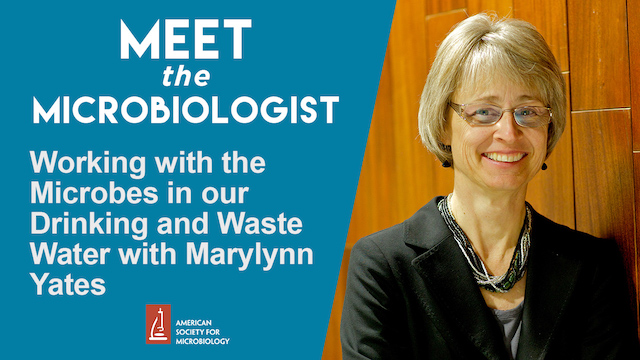 The urban water cycle and its importance in eliminating waterborne pathogens.