We live in a world of plastic. More than 400 million tons of the stuff, used in materials ranging from packaging to medical devices to automobile parts, are now produced every single year. This staggering amount of pollution is having a deleterious impact on the environment, food chains, disease prevention and the global economy. Plastic is a health hazard to marine animals, a potential toxin to humans and a disruptive presence to seaborne commerce. What role can the microbiology community play in helping to ameliorate, and ultimately solve, this challenge?

How Much Is Enough? 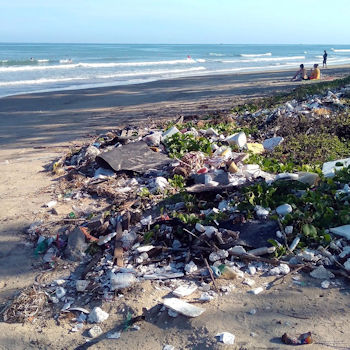 Less than 10% of plastic material ends up getting recycled. The rest is either sitting in landfills around the world or clogging up the planet's marine environments. Plastics decompose through several pathways, including physical breakdown, chemical reactions and biodegradation by microbes. As plastic degrades and decomposes on land, it eventually finds its way into waste streams and groundwater, ultimately being carried by rivers to the world's oceans. Plastic was first reported in oceans in 1972; 50 years later, the amount of plastic entering the sea is estimated to be somewhere between 5 and 13 million metric tons annually.

Mainstream attention related to marine plastic pollution tends to focus on visible "trash islands." The most notorious example is the "Great Pacific Garbage Patch" (GPGP), located in the Pacific Ocean and estimated to be approximately 1.6 million km2 in size (and growing). However, these observable pockets are only scratching the surface of the problem. Studies estimate that barely 0.5% of aqueous plastic is on the ocean's surface. Much like an iceberg, the bulk volume is either lying beneath the surface or has sedimented on the ocean floor.

Scarily enough, all of these estimates, which surely undercount the true scope of the problem, also fail to account for microplastics, plastic particles that are less than 5 millimeters in diameter. Generated primarily by the fragmentation and breakdown of bulk items like water bottles, plastic bags and automobile tires, these invisible pollutants are exponentially more difficult to detect and remove due to their small size.

Microplastics in the ocean also create artificial surfaces to which microbes can sorb. Researchers are working to characterize the nature of these interactions, and the findings have been far from conclusive. Several reports have shown that different types of aqueous microplastic surfaces attract different microbial species, with distinct microbial colonies being found between polyethylene, polystyrene and polypropylene surfaces. 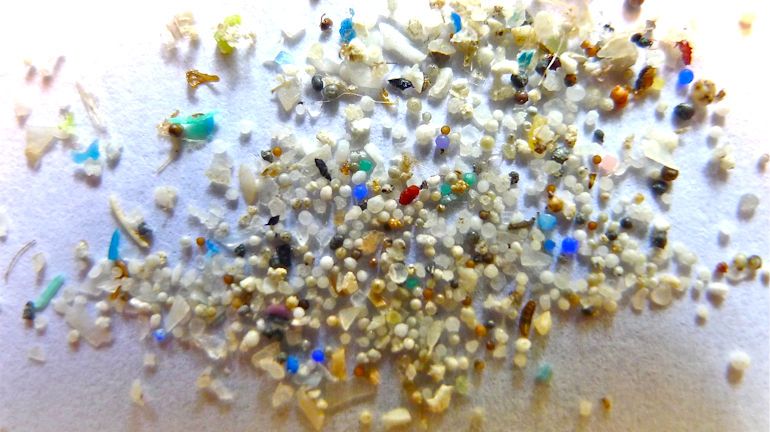 Perhaps a more important question is, what are microbes doing on these microplastic surfaces? One rising concern within the scientific community is that microplastics found in bodies of water can provide new platforms for biofilm formation. Unfortunately, this fear seems to be playing out. A recent report demonstrated that bacteria congregating on aquatic microplastics engaged in increased amounts of horizontal gene transfer compared to either free-living bacteria or microbes aggregating on natural surfaces. The obvious implication, on which the authors speculate, is that this behavior will lead to increased spread of antimicrobial resistance (AMR) genes, already a major challenge being tackled by the microbiology community.

With so many different actors and such variable results coming in from around the world, a critical first step for the field would be to agree upon common methodologies that could be used to conduct experiments about microbial behavior connected to plastics. As Dr. Nicole Fahrenfeld, Ph.D., associate professor of Civil and Environmental Engineering at Rutgers University, points out, “If we have a contaminant (i.e., microplastic) that can move to all these different places, it would be useful to have some universal standards in order to collect information from across the world.”

Unfortunately, according to Fahrenfeld, “sampling and analysis methods for microplastics themselves are still in development.” Because current methods for monitoring, studying and reporting these phenomena are not consistent across locations and institutions, “there’s a pretty wide range of information in databases of microplastic occurrence,” Fahrenfeld said.

Merely improving communication efforts will not be enough. Combating the microplastic-induced spread of AMR will require going beyond current efforts searching for new antibiotics. The looming sense of urgency around this multi-faceted issue suggests the need for a more radical approach. One idea is to experiment with the selective deployment of genetically engineered microbes that could potentially out-compete the disease-causing organisms.

Elise Phillips, a researcher at the University of Tennessee Knoxville, suggests “shifting to actual application of knowledge” about the organisms that are responsible for spreading AMR genes, especially those found sorbed to microplastics. “How,” she asked, “do we use these communities or alter them in a way that will help us with the problem” of microplastic-induced spread of AMR? Phillips suggests that researchers investigate this line of inquiry as a way to kickstart the search for potential solutions.

Such radical problem-solving approaches are already taking place in other spheres, and they are aimed at eliminating the plastic that already exists while also minimizing (or altering) the production of new plastic products. A large amount of research is currently focused on characterizing and applying microbial enzymes to break down plastics, in particular the widely used polyethylene terephthalate (PET). For example, a 2016 report from researchers in Japan identified two enzymes, PETase and MHETase, that are capable of breaking down PET into molecules that can be metabolized by different microbes.

However, microbial degradation of plastics, which is dependent on a wide variety of biological, chemical and environmental factors, is highly variable in terms of its efficiency. Simply allowing this process to proceed naturally will not remove plastic pollution at a scale, or over a timespan, that would allow humans to continue with their way of life. Instead, microbiologists are hard at work looking for ways to kick this process into a higher gear. Researchers are ramping up their efforts to identify previously unknown microbes and novel enzymes that can contribute to the biodegradation process. Meanwhile, other scientists are using machine learning to design novel biodegradation enzymes that can be deployed at scale.

Unfortunately, science moves slowly, and its findings and solutions tend to have limited reach beyond the scientific community without external interventions. This is where policy comes in. Adoption of science-based policies, whether at the local, national or international level, can have significant impact by raising mass awareness of an issue and effecting change quickly on a large scale.

An example of a simple, yet effective, policy that has had a huge impact with respect to plastic pollution has been the implementation of plastic bag tax laws. Municipalities around the world have instituted regulations that charge consumers a nominal amount (usually on the order of $0.05-$0.10) for each plastic bag they use when shopping. While the cost is small, the mere thought of having to pay for a bag apparently is enough of a nudge to induce widespread behavioral change. Studies indicate that taxes adopted in Chicago led to a 30% reduction in plastic bag use, while a similar policy adopted in Montgomery County, Md., led to a 42% drop. Other research shows that implementing bag taxes is correlated with significant decreases in the volume of plastic bags collected from municipal waterways, suggesting that the taxes are working as intended. 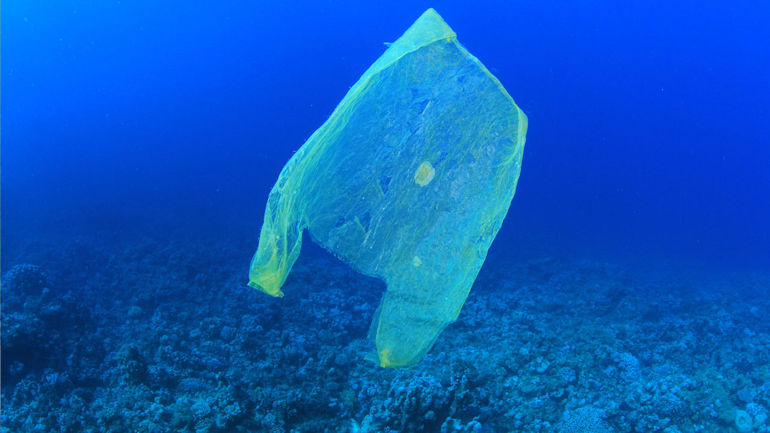 Higher-level policy change is also in the works. In March 2022, the United Nations announced that 175 countries will be working to develop a legally binding agreement on ending plastic pollution. Signatories will look to promote sustainable production and consumption of plastics, enhance the development of comprehensive measuring and reporting tools on plastic pollution, and implement educational and awareness efforts at both the national and international levels. Such international agreements have worked in the past. The most notable (and successful) model is the 1987 Montreal Protocol, which outlined concrete steps, such as phasing out the use of hydrochlorofluorocarbons, that have put the planet on track to have a fully restored ozone layer by 2050.

Outside of the lab and beyond the political arena, microbiologists can contribute through their personal actions. Potential steps include using fewer plastic products, making sure to recycle when possible, and participating in clean-up days that remove trash from the environment and prevent plastics from getting into the water supply in the first place.

Cleaning up the Earth’s plastic problem may seem intractable, yet achievable solutions are within reach, especially through the lens of microbiological research. Members of the microbiology community have the ability, and the responsibility, to do their part as scientists and as citizens to take on, and ultimately overcome, the challenge of plastic pollution.

Geoff Hunt, Ph.D., is the public outreach program officer at the American Society for Microbiology. 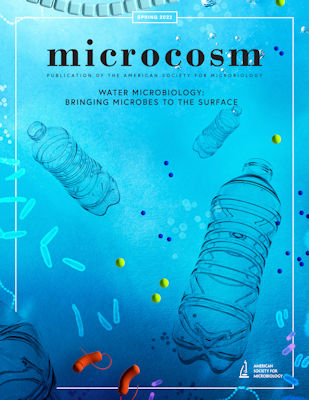